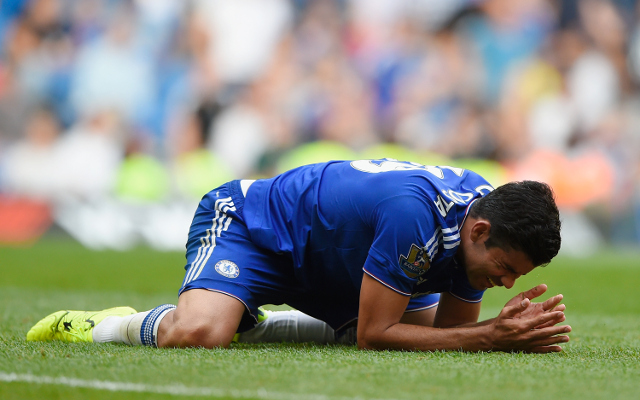 Chelsea striker Diego Costa has seemingly been spotted telling Sergio Ramos that the club are blocking him from leaving Stamford Bridge.

The Premier League giants played against Real Madrid in Michigan on Saturday, with Chelsea ultimately going on to fall to a 3-2 defeat.

While Costa didn’t feature due to an on-going back injury, he did have time to catch up with his former foe and engage in a telling conversation regarding his future.

Antonio Conte did little to dismiss speculation over the weekend by revealing that he didn’t know where Costa’s future was, as noted by Sky Sports, with Atletico Madrid continuing to be linked with a move for their former striker.

As picked up by Spanish media as seen in the video below, Ramos can be seen asking Costa why he doesn’t come back to Madrid.

Although Costa’s back is to the camera, thus making it impossible to see what his response was, Ramos then adds: “They won’t let you?”

The Real Madrid defender then adds: “Ah, because Gameiro is coming?” with the French striker joining Atletico Madrid from Sevilla last week.

It remains to be seen how accurate the lip-reading skills below are and whether or not Costa is waiting to be given the go-ahead to leave Chelsea this summer.

Gameiro’s move to Atleti certainly makes it more difficult for him to now return to the Spanish capital, with Diego Simeone likely to pair the former PSG star with compatriot Antoine Griezmann with the likes of Fernando Torres and Angel Correa on the bench.

In turn, with that possible option off the table, it’s unclear as to where the Spanish international would move to if he doesn’t plan on featuring for Conte’s side.