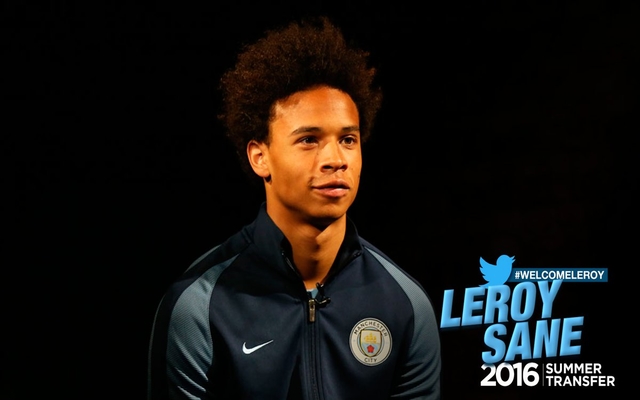 Manchester City star Leroy Sane has given his first interview since his move to the club was officially confirmed, and immediately spoke of Pep Guardiola’s role in his decision.

The German international has completed a move worth £37m, as reported by BBC Sport, and becomes Guardiola’s most expensive signing to date.

Having been left impressed by the 20-year-old during his time in Germany as Bayern Munich coach, it’s evident that the Spaniard had him in mind when taking up his new role.

The City boss was certainly excited about the acquisition, as Sane now joins Ilkay Gundogan and Nolito as another high-profile signing from the club so far this summer, and the former Schalke man wasn’t shy to discuss the influence that Guardiola’s presence at the Etihad had on his decision.

“I feel really good, I’m happy to be here and happy that it has all worked out. Now I can settle here in Manchester and play for City.

“One of the reasons I decided to join City was Pep Guardiola; he convinced me to come here and that I can continue to progress. I know I will learn a lot under him and now I can take the next step in my career.

“I followed Pep at Barcelona and at Bayern where he achieved a lot and worked really well with young players.

“I think he can make me a more complete player. I think I will need a bit of time to start with because it’s another league and there’s a different style of play but I think I can adapt very quickly.”

Sane scored eight goals in 33 Bundesliga appearances last season, and was part of the German national team that reached the semi-finals of Euro 2016 earlier this summer.

However, he will now face a battle to get into the starting line-up, with Guardiola having an array of attacking talent at his disposal to play either on the wing or behind the main striker, which many envisage will continue to be Sergio Aguero.

Nevertheless, he has the talent and youth on his side to become an important part of City’s future and Guardiola will hope that it’s another successful addition to his squad.

Leroy Sané: a rough diamond who could be a Manchester City bargain at £37m https://t.co/LqogKGD4Kp By @alansmith90https://t.co/lRCvma5sxp