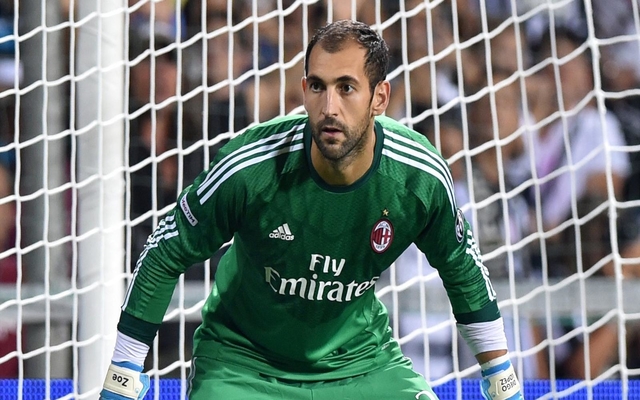 AC Milan coach Vincenzo Montella has revealed that goalkeeper Diego Lopez has yet to make a decision on his future as he mulls over a Chelsea offer.

The Spanish veteran lost his place in the Rossoneri starting line-up last season, with Gianluigi Donnarumma establishing himself as first choice between the posts.

As the teenager continued to impress, Lopez was forced to remain on the sidelines through injury too, and in turn he has been forced to consider his options away from the San Siro.

According to the Evening Standard, the former Real Madrid shot-stopper has been lined up by Chelsea in case Asmir Begovic moves on ahead of the deadline.

The Blues star has been linked with an exit due to his fears of not getting first-term football behind Thibaut Courtois, and so in the event that he leaves, Antonio Conte will need a back-up option to the Belgian with Lopez emerging as the top candidate.

Montella was asked about the 34-year-old after his side’s 3-1 defeat to Chelsea in their pre-season meeting in Minnesota, and didn’t rule out an exit.

“He is a great goalkeeper but he doesn’t know what the future holds for him as it has not been decided.

“He has not ruled anything out.”

Montella is unlikely to stand in the way of Lopez leaving, with Milan boasting several promising options behind Donnarumma who continues to establish himself as one of the top goalkeepers in Serie A.

Despite breaking into the team at the age of just 16, the Italian ace has shown maturity beyond his years and a consistently high level of performance.

Lopez would undoubtedly have played a key role in that process regardless of his own frustration at not playing, but he could now form an important part of Conte’s plans at Stamford Bridge moving forward.

Chelsea willing to sell 54-time international this January if they can land 6ft 5in replacement January 24, 2017 12:17
Chelsea FC