German publication Bild claim that Klostermann is Arsenal’s top target and that he has previously attracted the attention of Tottenham Hotspur, Ajax and Juventus.

According to The Sun, the French tactician is keen to bolster his defensive options going into the start of the 2016-17 season. The Gunners currently have just two centre-backs ready to start – Laurent Koscielny and Rob Holding.

The Sun add that Per Metesacker is expected to be out for four months with a knee injury while Gabriel was stretchered off during a pre-season friendly. Meanwhile Koscielny only began pre-season training at the beginning of this week.

Klostermann is currently representing Germany at the Olympic games in Brazil. The 20-year-old is under contract with Leipzig until 2018 and can play in any position across the defence.

The young defender provided four assists and scored one goal in 31 appearances in all competitions for RB Leipzig last season.

He has yet to play in Germany’s top division, but he will get the chance should he stay with Leipzig, who were promoted as runners up in the 2. Bundesliga last season.

Little over a week ago, Wenger was quoted by the London Evening Standard as saying: “We have to look for an option to get a bit more experience. With Per being out, we are a bit short on the experience front and we are looking to bring somebody in.”

This guy might be a good young talent, but he hardly fits the criteria!

Arsenal take on Liverpool in their opening game of the 2016-17 season this weekend. 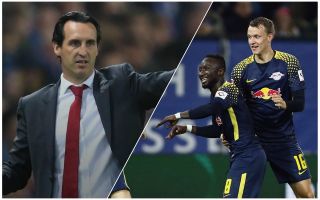