With the 2016/17 Premier League season set to get underway this weekend, 33 BBC pundits have all had their say on the title race amongst other things.

Each pundit has given their pick of team to end the campaign as champions, and it has certainly delivered some interesting results, but ones that will make Arsenal fans want to look away.

Seven teams in total feature, while perhaps unsurprisingly, not a single expert is backing Claudio Ranieri to guide Leicester City to back-to-back titles.

With the Foxes out of the picture, it essentially comes down to Arsenal, Chelsea, Liverpool, Manchester City and Manchester United, with varying predictions on how the top-four will look at the end of the season.

Manchester City are considered favourites given that 18 voted that Pep Guardiola will make an immediate impact at the Etihad, while city rivals United gained 12 despite the arrival of Jose Mourinho and new signings Zlatan Ibrahimovic and Paul Pogba.

Chelsea collected three votes for first place as there is seemingly a lack of confidence in Antonio Conte’s ability to turn things around straight away, while Tottenham Hotspur had one with Chris Waddle backing his old club to build on last season’s performance.

Perhaps tellingly is also the fact none of the pundits taking part backed Arsenal to win the title despite their second-place finish last year.

The Gunners haven’t been overly active in the transfer market this summer with Granit Xhaka their only marquee name as of yet, and so clearly it hasn’t been enough to convince many that they have what it takes to win the title.

Nevertheless, as is the case with all the clubs mentioned, there is still over two weeks or so until the transfer window closes, and so opinions and picks could very well be forced to change before the end of August with all seven teams mentioned likely to strengthen further. 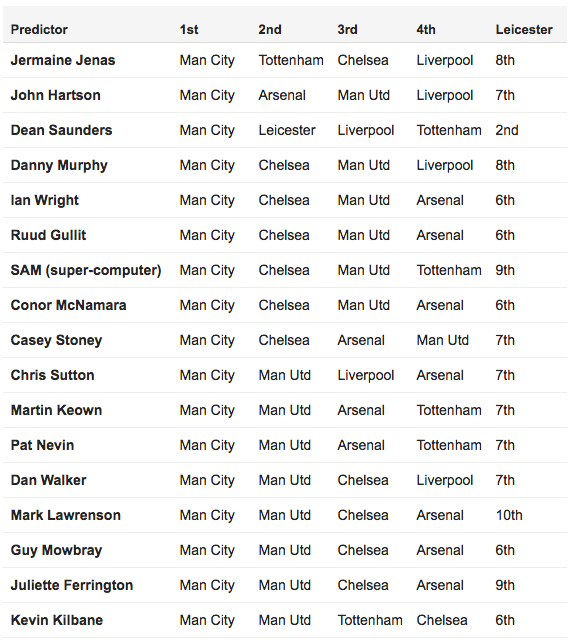