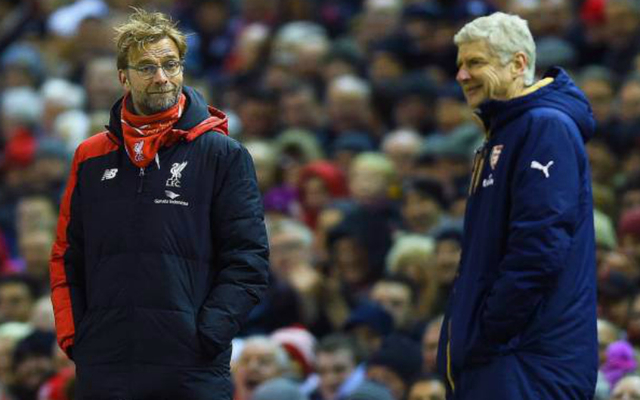 Liverpool boss Jurgen Klopp has questioned Arsenal’s style of football in recent times and wasn’t impressed by their approach in their meeting last season.

The Gunners have built a reputation under Arsene Wenger for playing the best, and most attractive, football in the Premier League, albeit without the level of success that they would have liked over the years.

However, Klopp has questioned that suggestion, arguing that their rivals resorted to ‘long balls’ in their 3-3 draw at Anfield in January.

“I think everyone who saw the game saw the difference between this game and all the other Arsenal games,” Klopp told the media in his pre-match news conference.

“But in the last few years Arsenal had a more direct style. They have only good football players but at the end they don’t use all of them in each build up or each offensive movement, it is a myth. It is definitely a plan and they want to win games.

“Arsenal is usually a football playing team but last time against us there was a lot of long balls and always to Olivier Giroud. The second ball was to [Mesut] Ozil, they caused us a lot of problems in this game. That was a big threat on that day.

“It was not about what they did, it was about how they did it because it was highest quality with how Giroud and Mesut Ozil, especially, on this day performed.”

While the German tactician didn’t seem to be aiming a shot at Wenger and wasn’t trying to be disrespectful, it certainly was a surprising comment from him ahead of the season opener against the Gunners on Sunday.

With Olivier Giroud unlikely to feature following his exploits at Euro 2016 earlier this summer, it’s evident that Wenger won’t be able to use similar tactics this time round, and it remains to be seen how he combats that and the approach that Arsenal take to the game.

Many Arsenal fans will argue that it’s unfair to just pick out one game and suggest they have a ‘long ball mentality’, while others could make the point that it’s a useful quality to have to change up their approach if the situation requires them to.