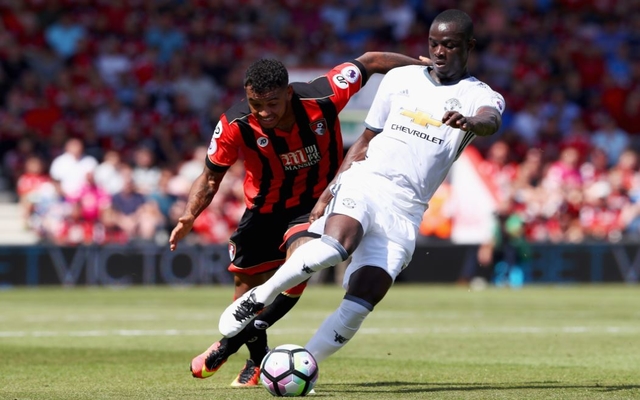 Manchester United got off to a winning start on Sunday, securing a 3-1 win over Bournemouth with Zlatan Ibrahimovic getting on the scoresheet on his debut.

Goals from Juan Mata and Wayne Rooney gave United a two-goal cushion before Ibrahimovic added a third, while Adam Smith grabbed a consolation goal for the hosts.

Check out our player assessment below:

Little that he could have done to deny Adam Smith’s goal, but when called upon he was up to the challenge and kept his focus throughout.

Energetic performance down the right flank from the United full-back, did well going forward and went about his defensive duties with minimal fuss.

A very assured performance on his Premier League debut, and if that was a taste of things to come then United fans will be very pleased with his signing. Commanding and not afraid to get stuck in while keeping his composure and showed maturity at the right times.

Solid display next to Bailly and improved his distribution as the game went on. Likely to drop out to Chris Smalling next weekend, but did his chances of keeping a place in the team no harm at all.

Was unable to have the same impact as Valencia on the right, but he’ll be delighted to get 90 minutes of Premier League football under his belt.

Was put under pressure by Bournemouth’s relentless pressing early on, but did well to keep the ball ticking over and tried to dominate the tempo of the game.

A solid presence in midfield and was needed with United’s other individuals more attack-minded. Broke up play well and went about his business quietly.

Deserved the goal for his hard work, grew into the game after the break and will be pleased with his performance overall. Remains to be seen if he keeps Henrikh Mkhitaryan out though.

Took his goal well and had chances before that. Will still need to improve in his role behind the main striker, but a solid start nonetheless.

Not one of his better games, but the French international will continue to adapt to what Mourinho wants him to do and his pace and movement will be more effective.

A goal on his debut and flashes of his quality was enough for Ibrahimovic to play an important role in the United win. Still getting used to his new surroundings and the tempo of the Premier League, back him to only improve in the weeks to come.

Did well off the ball, not enough time to get up to the speed of the game and be effective offensively.

No time at all to make an impression.