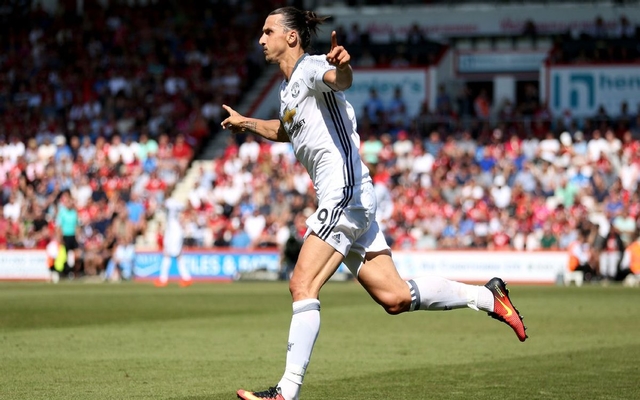 Manchester United forward Zlatan Ibrahimovic scored on his Premier League debut in a 3-1 win over Bournemouth on Sunday.

United took the lead in the first half through a goal from Juan Mata, and it wasn’t long before they were building a commanding lead in the Premier League opener, with Wayne Rooney grabbing their second of the day.

While Ibrahimovic had gone close earlier with a free-kick which forced Artur Boruc into a smart save, he wasn’t to be denied as he opened his Premier League account with this fine angled drive.

The 34-year-old has now scored on his debut in the Premier League, Serie A, La Liga, Ligue 1 and Champions League, as he continues to perform at a high level and tries to prove his detractors wrong this season.

Bournemouth did grab a consolation goal late on through Adam Smith with this excellent finish after some impressive build-up play from the hosts, but it wasn’t enough to spark a turnaround as United held on for all three points to begin Jose Mourinho’s tenure with a victory.

United host Southampton at Old Trafford on Friday night looking to make it two wins in two, while Bournemouth will hope to bounce back when they take on West Ham United.