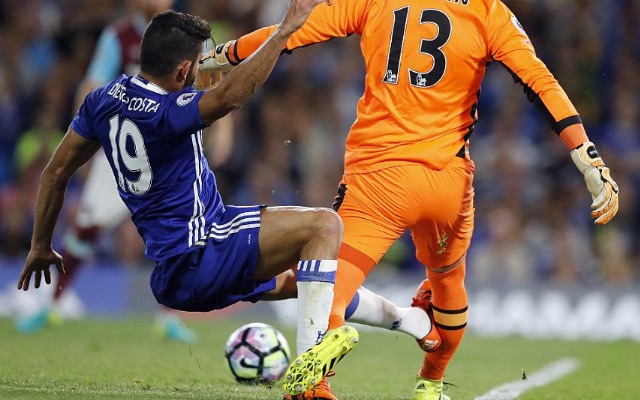 Diego Costa was the hero as Chelsea beat West Ham United 2-1 on Monday night, but the Blues striker, who scored the winning goal in the 89th minute, could well have been the villain had the referee done what was right.

Both men, who now work a Sky Sports pundits, feel that Costa should have been sent off for this horrible tackle on Hammers goalkeeper Adrian.

Diego Costa didn’t get a red card for this, somehow https://t.co/yof5vnaZpy

Costa was shown a yellow card midway through the first half for getting physical with the referee while protesting the non-award of a penalty for an alleged foul on Oscar.

Chelsea were given a penalty for another incident moments later, but that didn’t make Costa chill.

The former Atletico Madrid frontman went lunging in on Adrian after half time and should have been shown a straight red card in the eyes of Carragher and Neville – two men who seldom agree on anything!

Costa stayed on the pitch and inevitably scored the winner, after James Collins had cancelled out Eden Hazard’s spot kick.