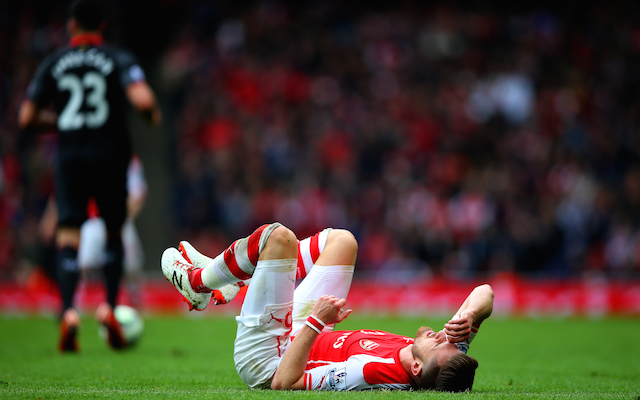 Arsenal’s injury crisis has worsened over the past 24 hours after Wales international Aaron Ramsey was diagnosed with a hamstring injury according to The Sun.

Ramsey was forced to come off the field during Arsenal’s 4-3 defeat at home to Liverpool after 60 minutes with an injury, and it has now been confirmed that the 25-year-old joins a long list of Arsenal players on the treatment table.

Per Mertesacker has been ruled out for four months while Gabriel is out with a knee injury after both picked up issues during pre-season, Danny Welbeck remains a long-term absentee while Alex Iwobi is also facing a spell on the sidelines after suffering a setback over the weekend.

In turn, the Gunners were forced into fielding the inexperienced duo of Rob Holding and Calum Chambers as their main central defenders against Liverpool.

Fortunately for the Gunners boss Arsene Wenger, he does have plenty of alternatives in midfield with the likes of Francis Coquelin, Mohamed Elneny and Granit Xhaka, while Alex Oxlade-Chamberlain, Mesut Ozil and Olivier Giroud will be fighting for a starting spot in the coming weeks too.

The Sun also states that Arsenal are hoping to sign the Germany international Shkodran Mustafi from Valencia over the coming days to address their defensive woes.