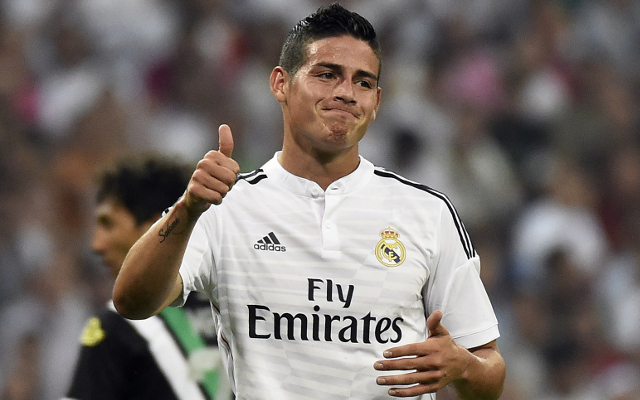 Chelsea are reportedly putting together what has been described as an ‘astronomical’ offer for Real Madrid playmaker James Rodriguez.

The Colombian international continues to face an uncertain future at the Bernabeu, as despite assurances early in pre-season it doesn’t appear as though Zinedine Zidane is ready to give him a prominent role in the side.

With Luka Modric and Toni Kroos preferred in deeper midfield positions and coupled with Isco and Marco Asensio getting more playing time than him this summer, it doesn’t particularly paint a positive picture for the former Monaco star.

According to Sport, Chelsea will look to swoop and have €150m to strengthen their squad before the deadline later this month. Further, it’s claimed that they would be willing to place a €90m offer on the table to convince both Real and Rodriguez to complete a transfer to Stamford Bridge.

In contrast though, it’s worth noting that Marca have run a story on the 25-year-old too, claiming that he is available for around €65m which in turn suggests that Chelsea aren’t likely to go that high just yet unless a bidding war breaks out.

Antonio Conte has already signed N’Golo Kante and Michy Batshuayi this summer, but given the improvements that the club are looking to make after their disappointing campaign last year, it’s felt as though the Italian tactician will need more than that to compete for a top-four finish.

While his first port of call was to get his current stars playing to their full potential, he’ll want to compliment them with some fresh faces to add extra incentive and impetus for the season ahead.

Rodriguez would certainly add star quality, creativity and excitement within the Chelsea camp, but on the other hand, there are doubts over whether or not a move to west London would be the right move for him.

If he is willing to be part of the team ethos that Conte is building and will make sacrifices and work hard for his teammates from a defensive perspective, too then perhaps a move will appeal to him. However, with reported interest from other clubs too, as noted by Sport, Chelsea’s financial strength may be better off used elsewhere.