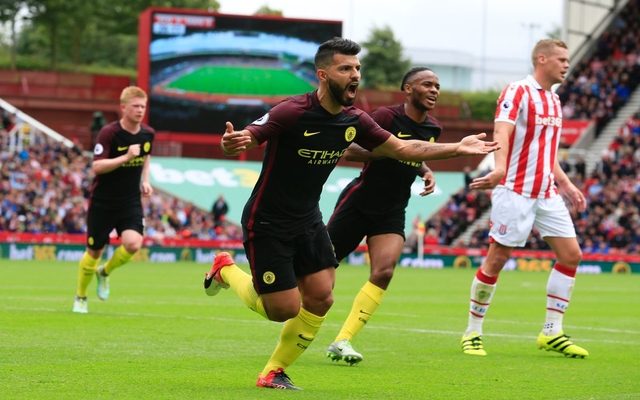 Manchester City took a commanding 2-0 lead into the half-time interval at Stoke City on Saturday, with Sergio Aguero bagging both goals.

The Argentine international scored a hat-trick in mid-week in City’s clash in the Champions League playoff with Steaua Bucharest, and he picked up from where he left off at the Britannia Stadium.

After Nicolas Otamendi was dragged down in the box by Ryan Shawcross, Aguero stepped up and confidently slotted his penalty past Shay Given, despite missing two on Tuesday night.

The penalty from Kun Aguero, he gets it right this time! [via @LMAOBRYAN69] pic.twitter.com/Fak9MKnwEC

It wasn’t long before he was back on the scoresheet to double his tally for the day as he headed home from an excellent Kevin De Bruyne free-kick as Given had no chance yet again.

City’s prolific forward has made a quick start to the new season, and he will certainly be crucial to Pep Guardiola’s side moving forward in their bid to land silverware.

Anything Zlatan can do Sergio can do too, two for Aguero already! #FPL pic.twitter.com/2tSK51UVOh

However, they were very fortunate not to have conceded a penalty themselves in the latter stages of the first half, with Joe Allen brought down in the box by Aleksandar Kolarov.

Despite his protests, the Welshman’s appeal fell on deaf ears as Mike Dean failed to award the spot-kick, leaving Mark Hughes’ men with it all to do in the second half to take something from the game.