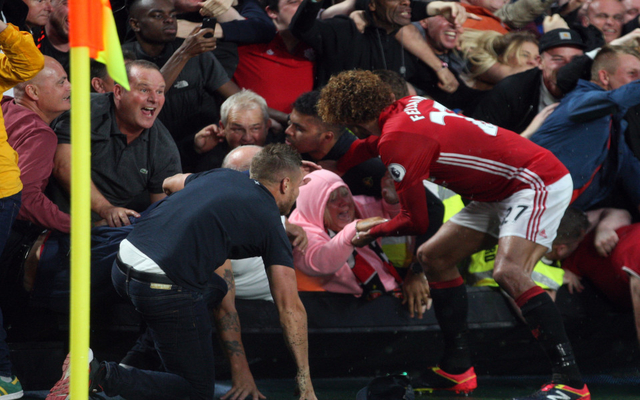 Marcus Rashford scored a dramatic late winner for Manchester United at Hull City on Saturday evening, but Marouane Fellaini was busy rescuing a fan from a dangerous situation.

The United supporters flooded towards the pitch as Rashford ran over to celebrate with them, causing an advertising hoarding to collapse.

As fans spilled over onto the pitch, one woman became trapped under the melee and fortunately Fellaini spotted her and made stewards aware of her situation while urging other fans to take note.

The Belgian’s work was done as she was helped to her feet and led to the side of the pitch by stewards, but naturally the incident would have caused concern and will likely be looked at further to avoid similar scenes being repeated.

Fellaini, who has been hugely impressive so far this season after being given a starting role by Jose Mourinho, will hope to continue his good form in the weeks and months ahead as he further endears himself to the United faithful.