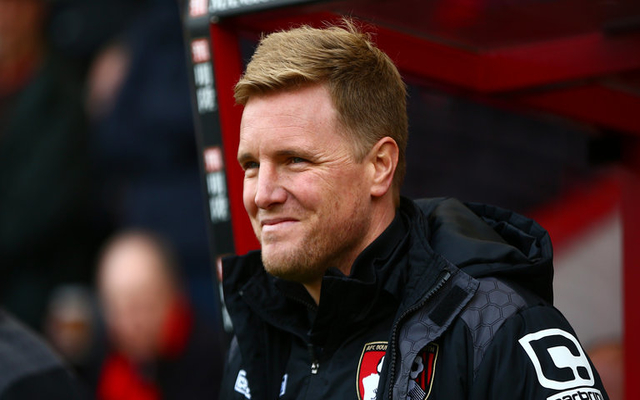 Arsenal supporters have shared their opinion on Twitter suggesting that Jack Wilshere’s move to Bournemouth has future implications for Eddie Howe.

The 38-year-old is considered one of, if not the most, promising English tacticians in the game, and his work on the south coast has certainly impressed many.

While he now has the chance to work with Wilshere for the rest of the season after the midfielder opted to join the Cherries on loan, Gunners fans believe that there are long-term benefits to the agreement.

Howe has been linked with the top jobs previously, and was even said to be in the running for the England role after Roy Hodgson’s resignation after Euro 2016.

However, certain sections of the Arsenal faithful believe that the decision to send Wilshere on loan to Bournemouth could be an insight into what the club are thinking in a post-Arsene Wenger era.

Granted there is little evidence from official sources to suggest that Howe is being lined up for the top job at the Emirates, but as he continues to attract attention with his fine work with his current employers, an ability to get the best out of Wilshere and to play the kind of football that would fit in with the culture in north London, could continue to reflect favourably on him when Arsenal need to make an appointment in the near future.

Jack Wilshere to Bournemouth. That, is an incredible move. Eddie Howe getting to know his new Arsenal players before joining #AFC ?

I'm afraid we will get Eddie Howe after Wenger!

Is Eddie Howe's year with Jack essentially the next stage of his job interview. will certainly be paying #AFCBournemouth a lot of attention

Buzzing for the day we get Eddie Howe as Arsenal manager ??

Maybe when @JackWilshere returns to #Arsenal he will bring Eddie Howe with him! 😉

I think there is more to this Wilshire deal than him just signing. I think Eddie Howe could potentially be the next #Arsenal manager

Interested to see how Jack Wilshere does at Bournemouth. Eddie Howe is a bright young coach, highly regarded at Arsenal, might I add.

Interesting to see if Wilshere joins Eddie Howe & if he can get the best out of him. Future Arsenal manager?