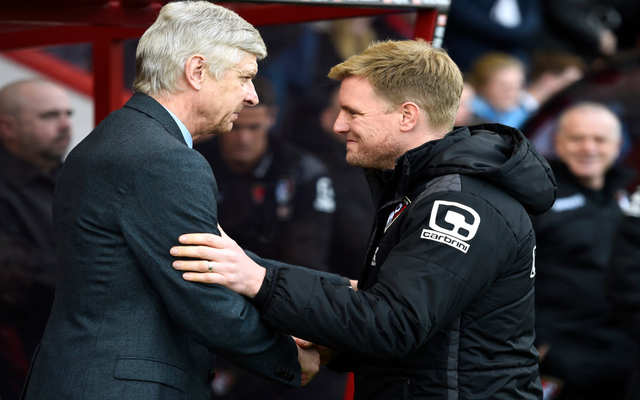 Eddie Howe is the current favourite to replace Arsene Wenger as Arsenal manager when the time comes.

According to Oddschecker, the Bournemouth boss is just 7-1 with Paddy Power and skyBET, while Atletico Madrid chief Diego Simeone is also seemingly in the mix as a 16-1 shot.

Arsenal fan and legendary football agent Jon Smith mentioned both men when asked by CaughtOffside if this season is likely to be Wenger’s last in his current job.

“It will be dictated by what happens this season,” said Smith, who recently published an excellent book called The Deal on the inner workings of football transfers.

“If he doesn’t have a good season – for example, if Arsenal drop out of the top four – I doubt he’ll stay. He’s too proud to do that.

“In terms of who comes next, I’m not sure – given the system at Arsenal – whether Simeone would be the right guy.”

Smith added: “I know Howe’s been mentioned. He’s an apprentice by comparison to Arsene and it’s a big, big club to manage with Arsene’s footprint all over it.

“It’s a following Alex Ferguson job all over again, so I think Arsenal fans should be careful what they wish for.

“I think the best case scenario is that Arsenal have a great year, Wenger signs a new contract for another couple of years, which takes him close to his 70th birthday, and during that time they groom the successor.

“It’s a really big club to manage. Its fan following is globally huge. And it’s not so much politics, but it is run like an American corporate and the new manager will have to understand that mindset.

“It’s a big step up from where Howe is now. What I would say though, unlike Alex Ferguson, Wenger could potentially be around and hold the guy’s hand for a couple of years.

“Fergie was very much ‘this is my show’ – as indeed is Arsene, but Alex’s personality was more bullish than Arsene’s, so there’s a possibility that Arsenal could bring somebody like Howe through while Arsene was still there.”

Smith has done many deals with Arsenal and has worked personally with Wenger on many occasions during the last 20 years.