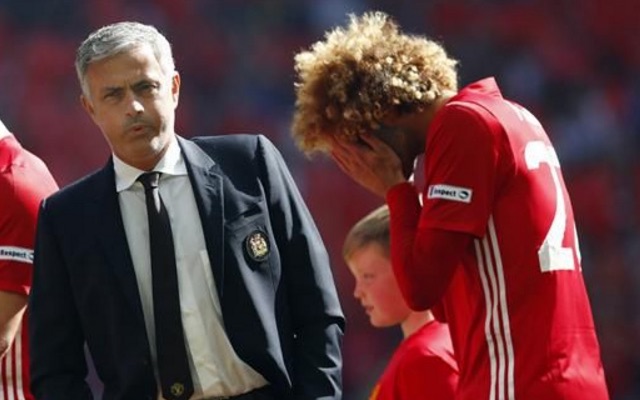 Having lost three games in a row, Manchester United simply cannot afford to slip up at Northampton Town in the EFL Cup tonight.

United’s last two Prem beatings were separated by a 1-0 loss to Feyenoord in the Europa League.

And midfielder Marouane Fellaini has admitted that the club are in “crisis”.

Fellaini, who has started every single game under new manager Jose Mourinho, told The Express: “It’s a little crisis, you could say, because Manchester United cannot lose three games.”

The big Belgian may be feeling the pressure, but the real scrutiny will fall upon Mourinho, whose odds of getting the sack were cut following his side’s defeat at Watford.

Mourinho had been 25/1 with Ladbrokes to be sacked before the end of the season, but was cut to 12/1 after defeats to City and Feyenoord.

The Special One then came in further to 8/1 on Sunday.

Ladbrokes representative Alex Donohue told CaughtOffside: “With every defeat, the odds of Mourinho getting the boot before the season is out are cut. Even at this stage of it looks like United might have a scrap on their hands for a top-four spot unless they turn things around quickly.”

Tonight’s opponents Northampton are 11th in League One with 11 points from their first eight games.

Northampton knocked out Barnsley and West Bromwich Albion to reach round three of the EFL Cup.