Arsenal stole the headlines over the weekend with their performance against Chelsea, and unsurprisingly, several of Arsene Wenger’s stars make Garth Crooks’ team of the week.

In a first-half blitz against Chelsea, the Gunners produced the type of football that neutrals love to see, while their rivals sunk without trace in another poor defensive display.

Petr Cech remained alert throughout and was equal to any threat posed by his former club, and the shot-stopper is joined by defender Hector Bellerin in the BBC team of the week after the Spaniard was again crucial from an attacking point of view and showed his exceptional pace to produce a vital defensive stop on Pedro.

Elsewhere, Laurent Koscielny led by example and kept Diego Costa quiet for the most part, while Alexis Sanchez produced a brilliant finish to open the scoring and proved his class up front. In turn, there isn’t much of an argument against Crooks’ selections so far.

Elsewhere, it was a good weekend for Manchester United, with Chris Smalling getting back the captain’s armband and he scored in his side’s 4-1 win over Leicester City at Old Trafford.

Paul Pogba was also on the scoresheet as he grabbed his first goal for United in an excellent overall display which showed why the Premier League giants spent so heavily on him.

Manchester City pair Sergio Aguero and Raheem Sterling were clinical as Pep Guardiola’s men made it six wins in six by seeing off Swansea City for the second time in the space of a week, while James Milner and Philippe Coutinho starred in Liverpool’s win over Hull City.

Finally, Heung-Min Son deserves plenty of credit as he continues to prove his worth to Tottenham this year, as without the injured Harry Kane, he stepped up and delivered as Spurs picked up all three points at Middlesbrough.

Following their 3-0 win at West Ham on Sunday, some Southampton players might feel hard done by after being snubbed, but it looks as though the debate-provoking Crooks has got it spot on this time round. 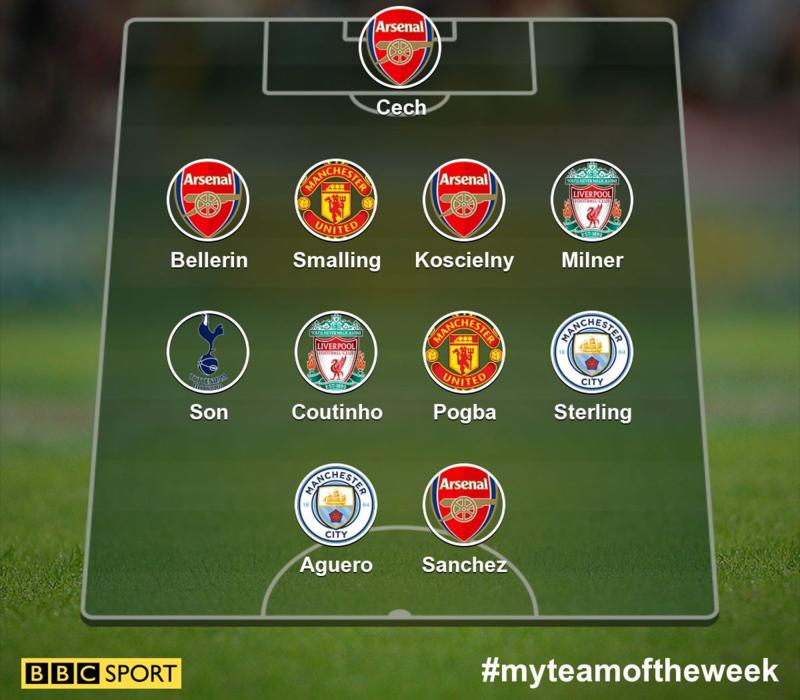