After taking just one point from their last three Premier League games, Chelsea face a trip to Hull City on Saturday.

History suggests the Blues should be able to get back on track at the KCOM Stadium, having not lost to Hull in their last 12 meetings, winning 10 of those games.

However, Chelsea boss Antonio Conte must take nothing for granted if he wishes to ensure his side avoid the prospect of this weekend’s trip being the unlucky 13th match in the sequence.

Hull have conceded nine goals in their last two Premier League outings, taking heaving beatings at the hands of Arsenal and Liverpool.

Aside from those two thrashings, though, the Tigers have looked decent upon their return to England’s top division.

In all competitions this season, Mike Phelan’s underdogs have won four games, drawn one and lost three.

The Blues will again be without captain John Terry, meaning Gary Cahill looks set to partner David Luiz at the heart of Chelsea’s defence, which has conceded 11 goals in the last four games.

Terry continued absence means Chelsea’s injury list currently has four names on it – Kurt Zouma, who should be back next month, and long-term absentee Marko van Ginkel are joined by JT and John Obi Mikel.

Ahmed Elmohamady will miss the game through suspension after being sent off in last weekend’s 5-1 loss at Anfield.

His place at right-back is likely to be taken by either David Meyler or James Weir.

Mark Lawrenson has gone for 2-0 to Chelsea in his BBC Sport predictions, while Sky Sports tipster Paul Merson says 2-1 to the Blues.

I’m saying 1-1, while fellow CaughtOffside boys Sumeet Paul and Andy Morris both agree with Merson’s prediction of Chelsea to win by the odd goal in three.

What the managers are saying

Contract talk was again the main topic of discussion as Hull boss Phelan spoke to Sky Sports on Friday.

He said: “I am always confident that my future will be resolved. There’s a lot of speculation out there. My own press officer comes to me with the off detailed report of what I’m supposed to be thinking or doing.

“My side of things is that we are still talking and we will continue to talk until it is resolved. What needs to be resolved is the terms of the deal. It keeps changing. One minute I think I’ve got something and the club are happy with and then the next minute it changes, so it’s a case of thinking about all these new changes on the table and coming to a decision.”

Meanwhile, Conte explained how he plans to turn Chelsea’s recent slump around. 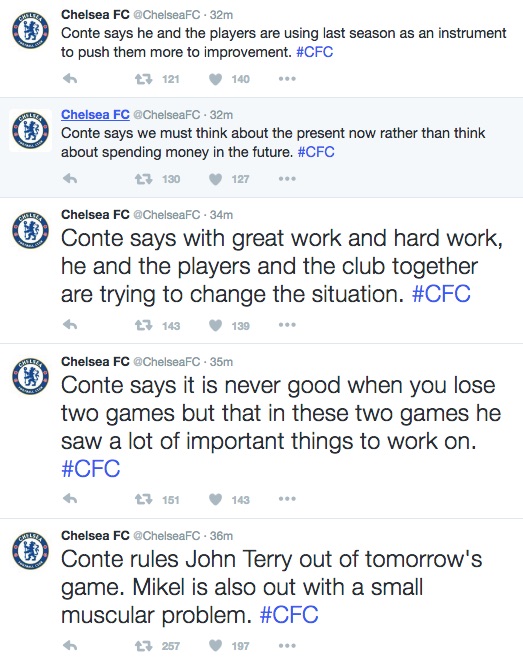