It’s fair to say that Chelsea goalkeeper Thibaut Courtois is not having a great start to the Premier League season, and this statistic reiterates that point.

Antonio Conte’s men have conceded nine goals in their first six games of the campaign, equal with Liverpool as the worst defensive record from the top 10 sides in the table.

While their defence also needs to take responsibility for that with Gary Cahill and David Luiz failing to offer solidity in front of Courtois in the last two outings, the Belgian international simply isn’t as decisive this year as he has been.

Marca have published the statistical table below showing the save ratio of each shot-stopper in the Premier League, and surprisingly, Courtois comes in bottom of the list with 47.06 percent of shots saved that he has faced.

It makes him the worst goalkeeper in that category and he’s the only player in the list to fall below 50 percent which will certainly raise some eyebrows. 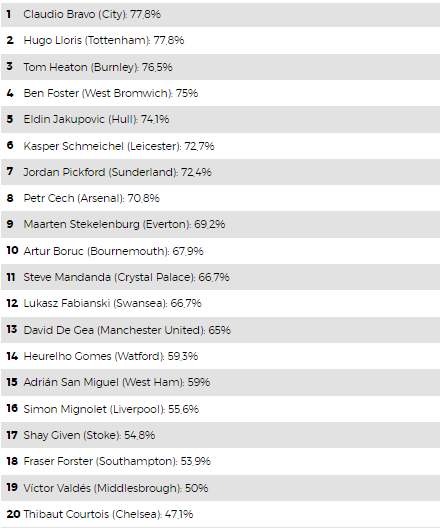 At the other end of the spectrum is Manchester City star Claudio Bravo who leads the way with a 77.8 percent save ratio, while he’s joined by Hugo Lloris and Tom Heaton of Tottenham and Burnley respectively in the top three, albeit with Lloris out with injury for most of the season thus far.

Conte will firstly want to get some organisation and solidity back in his defence in the continued absence of the injured John Terry, but the form of Courtois will be a concern when teams do breach the Chelsea backline.

For a player that has been considered one of the best in his position for a few years now given his level of consistency and decisiveness in key moments, the 24-year-old will need to improve quickly to help his side start to put some form together and climb the table.