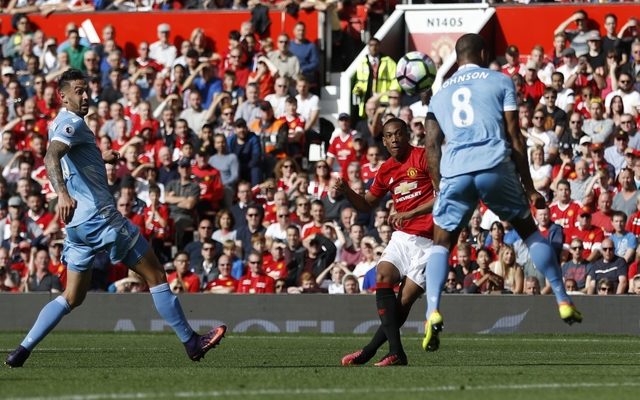 Manchester United were held to a 1-1 draw by Stoke City at Old Trafford on Sunday, with Joe Allen securing a point for the visitors with a late equaliser.

A combination of wasteful finishing and brilliant goalkeeping from Lee Grant ensured that United were held heading into the half-time interval, when really they should have been well ahead.

As frustration started to grow at Old Trafford, Jose Mourinho made a double substitution which paid immediate dividends as Wayne Rooney was dispossessed in the box, only for the ball to fall into Anthony Martial’s path before he produced this stunning finish.

Martial finally off the mark. pic.twitter.com/NWkQwcWAhi

United thought the breakthrough would earn them all three points, but Allen had other plans as he capitalised on a poor David de Gea save with the rebound bouncing up and off the crossbar only to fall at Allen’s feet as he tapped into an empty net.

Paul Pogba hit the woodwork late on as he produced a poor performance overall with three glorious chances missed, and United will undoubtedly be expecting better from him in the weeks and months ahead.

The draw ends United’s run of three consecutive wins in all competitions, as they now wait until after the international break to face Liverpool at Anfield on October 17 with the point on Sunday moving them up to sixth place in the Premier League table with 13 points from their opening seven games.