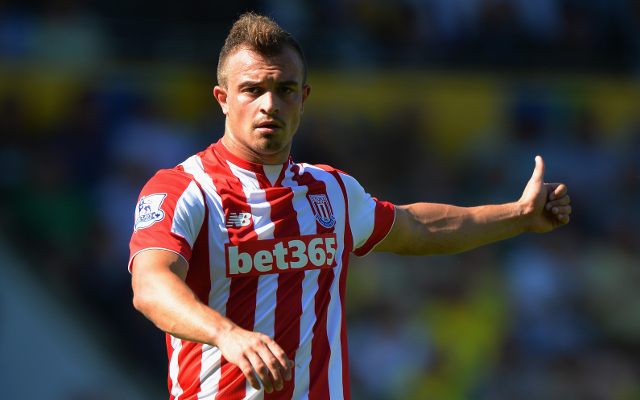 Stoke City ace Xherdan Shaqiri endured a quiet first half overall against Manchester United on Sunday, but he managed to find time for this moment of quality.

The Swiss international was dealt with pretty efficiently by United left-back Daley Blind throughout who restricted his influence on the game.

However, presented with a chance to take Chris Smalling on down the right flank in front of the travelling Stoke fans, Shaqiri opted to get fancy and not only led the England international on a little chase but then finished it with this nutmeg.

Unfortunately for him, he wasn’t awarded what he thought was a clear free-kick as Smalling prevented him from getting past before clearing the ball, and so it wasn’t as decisive as Shaqiri would probably have liked.

Nevertheless, it’s no surprise that it’s gone viral as one of the stand-out moments of the game, with a late Joe Allen equaliser cancelling out Anthony Martial’s brilliant strike to earn Stoke a 1-1 draw at Old Trafford.