On a weekend which saw Tottenham end Pep Guardiola’s 100 percent Premier League record in emphatic fashion, BBC pundit Garth Crooks has picked his team of the week with a heavy Spurs presence.

Crooks is usually good for sparking debate, but on this occasion you can’t really argue with many of his selections from this weekend’s action.

Lee Grant produced an inspired display at Old Trafford to deny Manchester United a comfortable win over Stoke City with a number of key saves, while Spurs defensive trio Kyle Walker, Toby Alderweireld and Jan Vertonghen were all instrumental in limiting City’s attacking threat on Sunday.

James Milner continues to impress at left-back for Liverpool from a defensive perspective and was as composed as ever in scoring the winning goal from the penalty spot at Swansea City, while Dimitri Payet scored a majestic solo goal to rescue West Ham at home against Middlesbrough.

Antonio Conte was one of the more relieved managers this weekend after he saw his Chelsea side bounce back at Hull City with goalscorers Willian and Diego Costa joined by summer signing N’Golo Kante in Crooks’ team, while Watford captain Troy Deeney and Heung-Min Son complete the starting line-up.

Deeney was on the scoresheet for the Hornets while Son impressed in an advanced position for Spurs as well as contributing a perfect assist for Dele Alli’s goal.

With United, Arsenal, Leicester City and others failing to impress, it’s a fair selection of players from Crooks this week.

Given the impressive nature of Tottenham’s performance in their win over City, perhaps a few others could make an argument for inclusion. Nevertheless, Mauricio Pochettino’s men will be more than satisfied with the three points, which move them to within a point of the league leaders.

With the international break, the 20 clubs will now have a chance to regroup in a week’s time and go again as Tottenham have made their statement while Liverpool continue to impress.

In contrast, United faltered again and will need to bounce back along with their city rivals, while Arsenal ground out a big win at Burnley, albeit in controversial circumstances with the winning goal, and they look set to have their say in the title race with many of Arsene Wenger’s players undoubtedly set to feature in the team of the week in future weeks. 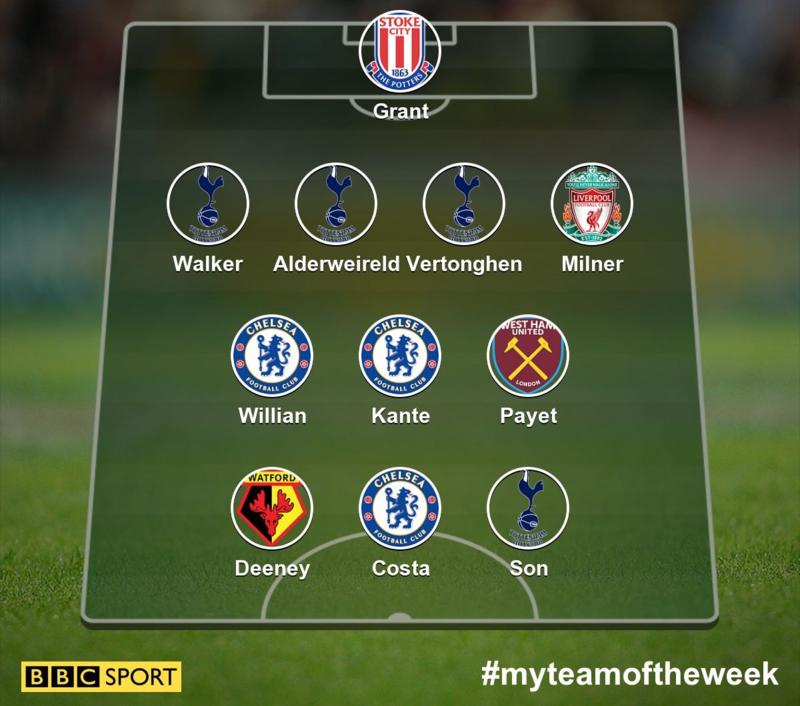