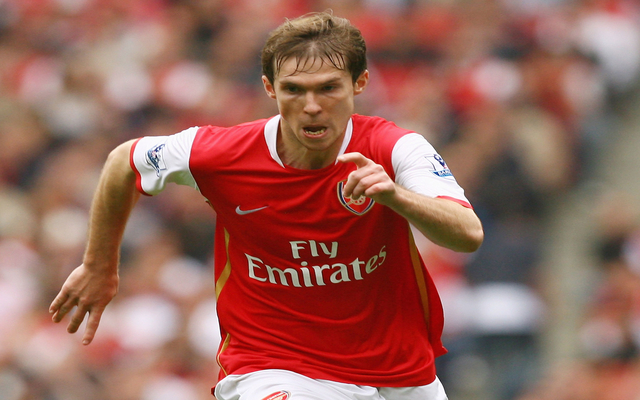 Former Arsenal star Alexander Hleb has been left hugely impressed with the Gunners so far this season and has revealed that he even fancies his old club’s chances of pulling off a treble.

The 35-year-old spent three years in north London between 2005 and 2008, playing his part in getting the club to the Champions League final in 2006.

Since he left the Gunners though Arsene Wenger has continued to fall short in his bid to win another Premier League title, but not only does Hleb believe that they can end that barren run this time round, but he also feels confident about their chances in Europe too.

“Wenger always sets the highest goals,” he said, according to Sky Sports. “He has managed to keep his key players and they are playing great football. They are tearing everyone apart.

“I hope the team will win three trophies this season, the Premier League, the FA Cup and the Champions League. This Arsenal side certainly has the ability and I will really be supporting them.”

Arsenal have made a strong start to the season having now bounced back from their opening weekend defeat to Liverpool with a nine-game unbeaten run across all competitions.

In turn, Wenger’s side will likely be growing in belief about their chances of winning silverware this year, but ultimately there is still a long way to go.

Meanwhile, Hleb also revealed his biggest regret in his career to date, as he looked back on leaving Arsenal for Barcelona in 2008 wishing that he had stayed with the Premier League giants for longer.

“I was playing at the top of my game in London and it was the best moments of my career,” he added.

“On the one hand, I regret that I did not stay at Arsenal. Wenger was like a father to me and trusted me. I get sad when I start to think about this.”

Wenger celebrated 20 years at Arsenal last week, and having seen countless talented individuals pass through north London during his tenure, he will hope that his current group can deliver this season and live up to Hleb’s expectations.