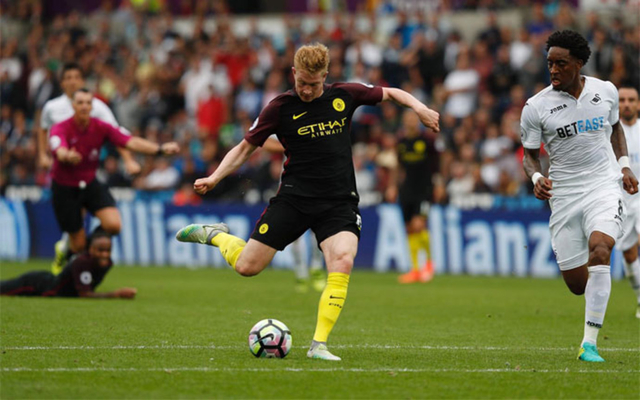 Manchester City boss Pep Guardiola has been dealt a huge injury blow ahead of his reunion with Barcelona, with Kevin De Bruyne reportedly set to miss out.

The Belgian international picked up a hamstring injury in the win over Swansea City last month, disrupting what had been an impressive start to the season.

De Bruyne had scored two goals and provided six assists in nine games in all competitions prior to the setback, but according to an ESPN FC source, he may be about to miss one of the biggest encounters of the campaign so far.

It’s claimed that the 25-year-old will not recover in time to travel to the Nou Camp on October 19, and in addition to that Champions League clash, he will also likely miss the Premier League meeting with Southampton the following weekend.

Given the latest update, it’s now suggested that a more likely scenario is for De Bruyne to make his comeback against Manchester United in the EFL Cup on October 26.

That conversely will come as a blow for the Red Devils given the fact that the former Wolfsburg star has already caused them major problems at Old Trafford this season, having scored and played an instrumental role in City’s 2-1 win in the league last month.

However, Guardiola is unlikely to be looking that far ahead, with showdowns with Everton and then Barca to come after the international break concludes, with De Bruyne now not expected to feature in either as he continues his recovery.