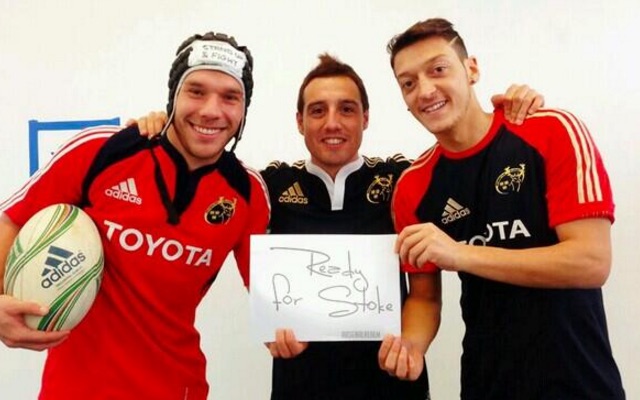 Arsenal manager Arsene Wenger once blasted Stoke City for their “rugby tactics”, telling The Independent in 2010 that “you cannot say any more it is football” when discussing the Potters and their style of play under Tony Pulis.

He clearly meant this as an insult, even though rugby was the darling of his beloved county back then following France’s Grand Slam success in the Six Nations just a few months earlier.

Perhaps Wenger just doesn’t like rugby? Maybe he had a bad experience with the egg-shaped ball during his school years?

Wenger may not be a fan of rugger but one of his summer signings clearly loves it.

Centre-back Rob Holding, who at 6′ 2″ is nicely built for most sports, tried his hand (literally) at a spot of rugby during an international training session this week.

Holding – a July arrival from Bolton Wanderers – picked up the ball and ran at his England U21 teammates.

England’s U21s are currently preparing for a game against Bosnia and Herzegovina in Walsall on Tuesday.

Holding could be partnered in defence by fellow Arsenal man Calum Chambers, who is currently on loan at Middlesbrough.