Arsenal defender Laurent Koscielny has failed to make a list compiled by Italian newspaper Tuttosport of the 20 most valuable defenders in world football.

The list, as seen in the image below, features many of the top names in Europe, including the likes of Leonardo Bonucci, Jerome Boateng and Sergio Ramos who lead the way in the top three positions.

However, Koscielny doesn’t have a place in the top 20 despite being an integral part of both his club and country’s success for over five years now.

The French international has 186 Premier League appearances under his belt along with 39 international caps, and has continued to perform at a high level to establish a reputation of being one of the best defenders in the world.

Further, considering Nicolas Otamendi and even David Luiz make the list, it’s questionable as to what criteria the Italian media outlet has used in putting together their list.

It probably won’t, and shouldn’t, bother Koscielny too much as his ultimate aim is to help Arsenal win silverware this season, and that will likely be all the proof he needs that he is one of the most valuable defenders in the world as he continues to play a pivotal role in marshalling the Gunners backline.

Nevertheless, it’s still a surprise not to see him at least make the top 20, with many in the list questionable inclusions to say the least. Age could be argued as a factor against him, but Ramos, Diego Godin, Gerard Pique, Thiago Silva and Giorgio Chiellini would then also be in the same category. 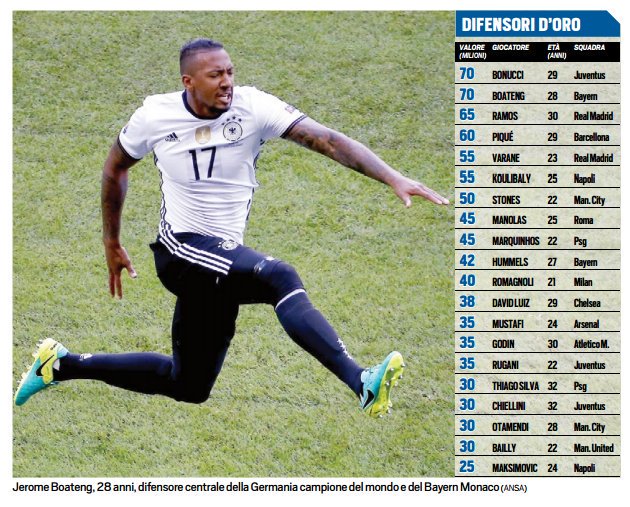