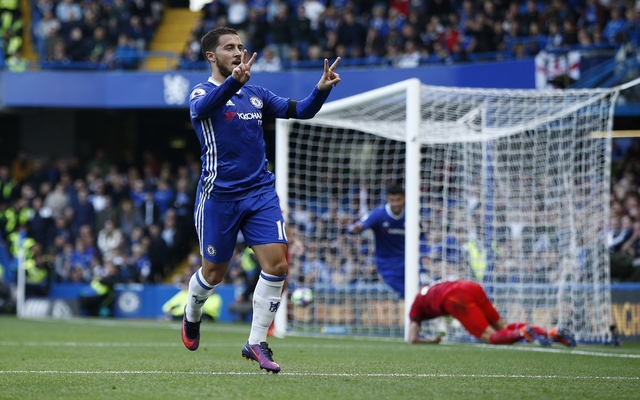 Chelsea opened up a two-goal lead over Leicester City in the first-half of their clash at Stamford Bridge on Saturday, with Eden Hazard getting on the scoresheet.

The Belgian international had just two goals and one assist in nine appearances prior to this weekend, and the critics were back out as many expect him to be much more influential for Antonio Conte’s side this season.

Although he received a massive helping hand from the Leicester defenders who were poor throughout the opening 45 minutes, he kept his composure and produced a classy finish to round Kasper Schmeichel and apply the finishing touch into an empty net.

In truth, the hosts could have had more as they also struck the crossbar through a David Luiz free-kick, but they’ll be happy with their display as they look to pick up from where they left off against Hull City prior to the international break.

As for Claudio Ranieri, he may well have one eye on his side’s Champions League clash with FC Copenhagen on Tuesday night, but he won’t be happy with what he’s seen thus far as his side continue to struggle this season and look set to remain in the bottom half of the Premier League table unless they can mount a shock comeback in the second half in west London.