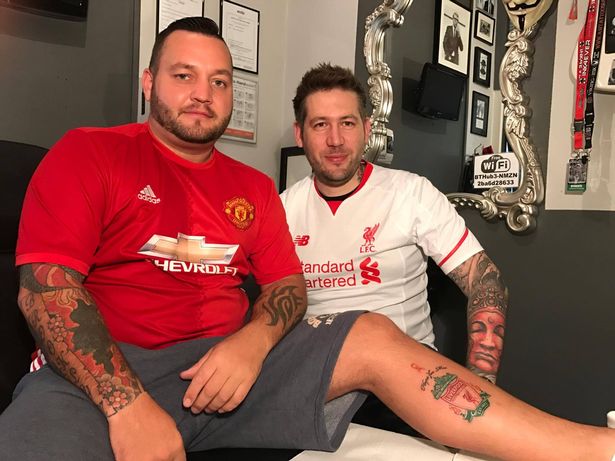 Manchester United fan Wayne Ryan has had a tattoo of the club logo he ‘detests’ – Liverpool –  etched onto his calf, according to the Liverpool Echo.

Per-the-source, Wayne went under the needle for five hours today and came out sporting a Liverpool FC logo permanently penned onto his skin.

However, Wayne had the tattoo done in order to support a family friend, Mia Tate, who is suffering with leukaemia. The words ‘Hope for Mia’ and an orange leukaemia cancer ribbon were also included alongside the Liverpool crest.

“I haven’t even got a United tattoo, my friends are all calling me mad but they have kids and they realise it is for a really important purpose,” Wayne told the Liverpool Echo.

“I felt sick when it was being put on.

“The tattoo artist said he was going to make it hurt as much as possible.

“You wouldn’t catch me putting an LFC shirt on for one minute so this was a big deal but Mia’s family are really grateful for me doing it.

“She is home with her mum and dad this weekend and having bone marrow testing.

“It was certainly a different thing to do, if you jump out of a plane it is over and done with, but I am having to put up with this!

“It feels really weird looking at it but I just have to think about what it is for.”

The young Mia is a family friend of Wayne, who is a life-long United fan and can’t stand Liverpool. Wayne had the tattoo done after reaching his fundraising target of £1,000, with all the money going to Mia’s cause.