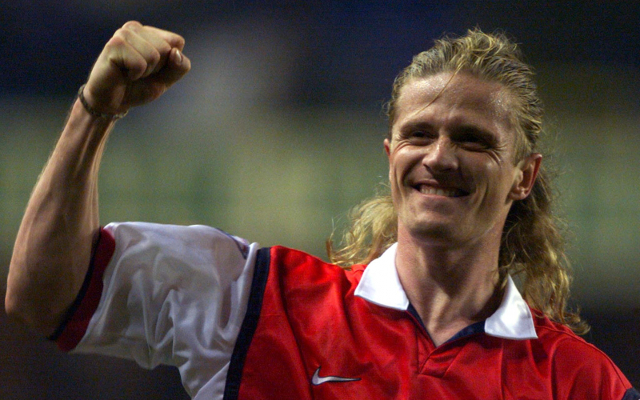 Former Arsenal midfielder Emmanuel Petit has revealed his belief that the Gunners are still short of a world-class striker that would make them genuine Premier League title contenders.

Arsene Wenger’s men are currently second in the table, joint top with Manchester City, having won six of their first eight games of the campaign.

Further, the Gunners have scored 19 goals so far this season, the joint-best scoring record again with City in the league, albeit with Liverpool just one behind and with a game in hand.

Nevertheless, despite their strong start to the season and the firepower that Wenger has at his disposal, Petit is still left short of being convinced about their credentials as ultimately he believes that they’re still missing a striker capable of scoring goals consistently.

“Even though I love Arsenal and Arsene, I try to stay objective,” Petit told SFR Sport, as seen in the video below. “They never quite satisfy me, and they often frustrate me.

“As long as Arsenal don’t have a striker who scores 40 goals a season like Aguero does at Manchester City … That’s what you need in any league: a striker who is one of the best in the world.”

Theo Walcott’s performance on Saturday could be interpreted as a perfect example of what Petit means, as although the England international scored twice and took his tally up to five for the season, he could, and should, have had a couple more.

Walcott, along with his fellow attackers, will need to continue to be clinical as a unit for the rest of the year, as Wenger doesn’t have a superstar striker to call upon, of the ilk of Aguero, to rely on them scoring the crucial goals to maintain their charge.

It’s nothing new for Arsenal, with Walcott scoring more than 20 goals in a season on just one occasion for the club, while Olivier Giroud had 24 in all competitions last season along with 25 from Alexis Sanchez in 2014/15 while the stand-out forwards in Europe continue to perform at a level above in terms of goals scored.