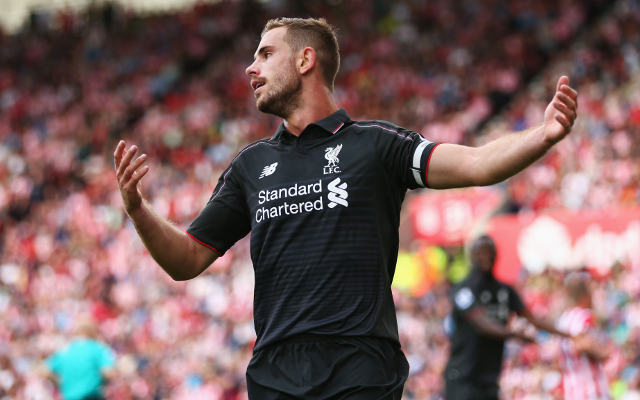 Liverpool midfielder Jordan Henderson has revealed that he’s hoping his side can avenge their devastating loss to Jose Mourinho in 2014 when he returns to Anfield on Monday.

The Portuguese tactician was in charge of Chelsea when they travelled to Merseyside in April 2014, and inflicted a 2-0 defeat on the Reds to end their Premier League title hopes.

Henderson was suspended for that game, but hasn’t forgotten what it was like to watch on from the sidelines and is evidently keeping that in mind when he crosses paths with the ‘Special One’ again on Monday night.

Although the situation is very much different now with Mourinho returning with Manchester United, it promises to be a fiery atmosphere at Anfield between the two clubs who have a long-standing bitter rivalry.

“I will never forget that Chelsea game at Anfield when we lost and we were going for the title,” Henderson told The Guardian.

“It wasn’t a nice game to watch but full credit to Jose. It was tactically very good from him and he is a great tactician, he is a world class manager and he has shown that in the clubs he has been at.

“I will never really forget that, so Monday will be a big occasion, if we can keep performing the way we are and win, to sort of put that to bed.”

Liverpool ended that season in second place behind champions Manchester City, but had they won that game then they would have been crowned Premier League winners for the first time.

Having started this year positively, knowing that a win over United would move them level at the top of the standings with both City and Arsenal after eight games, the belief will be growing within the group again as Jurgen Klopp looks to end their wait for a title.

Monday night won’t be decisive, but it will certainly give an indication of how far Liverpool have come under Klopp as they look to add another scalp to the collection having already defeated Arsenal and Chelsea this season.