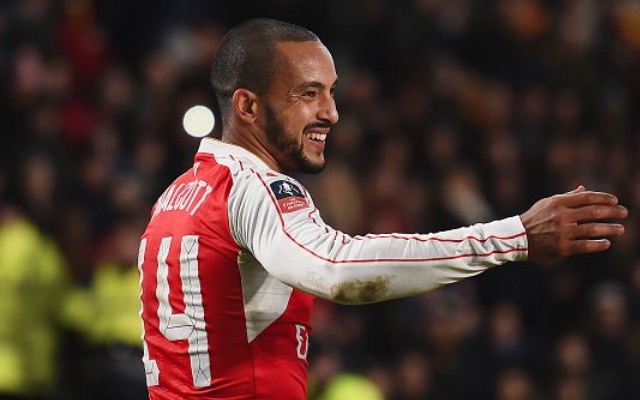 Arsenal manager Arsene Wenger has insisted that Theo Walcott’s excellent form so far this season comes from him “letting out the passion”.

The 27-year-old is in a rich vein of form currently, having scored seven goals and provided two assists in nine appearances in all competitions so far this season.

He added a brace in the win over Swansea City at the weekend, and should have had more having wasted some late chances.

Nevertheless, compared to his previous disappointments and underwhelming campaigns, Walcott is finding the back of the net with some regularity and will be desperate to ensure that it lasts for as long as possible.

When asked what was behind the upturn in form, Wenger simply believes that it’s the England international playing with less restrictions on himself.

“He lets the passion come out of his body,” the French tactician told the media, as noted by The Mirror.

“Was there interest in him during the summer? I have not spoken to anybody because I was not ready to let him go.”

Arsenal face Ludogorets in the Champions League on Wednesday night hoping to maintain their current form as they are unbeaten in their last 10 games in all competitions.

Walcott’s goals have been a key factor in that run, and given the fact that he has only ever scored double figures in a single Premier League season on just one previous occasion, he’ll be desperate to end that barren run having made such a positive start to the campaign this time round.

The former Southampton ace scored 14 league goals in the 2012/13 season, while he has already matched his total tally from each of the last three years in just eight league games this season.