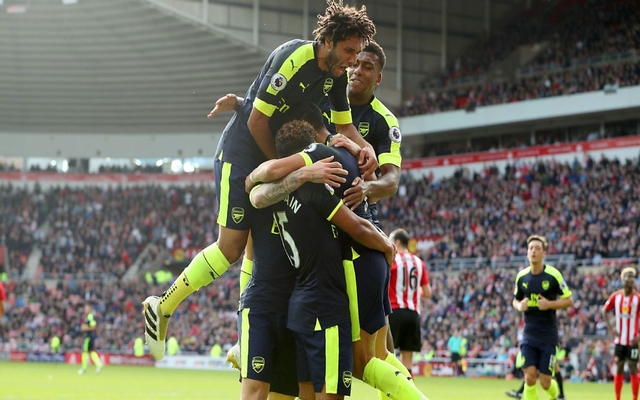 Arsenal secured a 4-1 win over Sunderland on Saturday with Alexis Sanchez and Olivier Giroud grabbing two goals apiece as the Gunners go top of the Premier League.

Jermain Defoe temporarily brought Sunderland back into it from the penalty spot but Arsenal were clinical thereafter as they picked up an important win to bounce back from the disappointment of being held at home by Middlesbrough last weekend.

Here are our player ratings for Arsenal following their win:

Quiet afternoon on the whole, but was booked after bringing down Duncan Watmore and couldn’t keep Defoe’s effort out.

Energetic and a real handful with his pace going forward as always and was solid defensively in keeping the lively Watmore quiet.

Caught out in the lead up to the penalty which was a red mark on an otherwise commanding display.

Dealt with any threat with minimal fuss whether it was in the air or on the ground in another impressive performance.

Will be delighted to have a run in the team with Nacho Monreal absent due to injury, and produced a steady display defensively while offering an attacking outlet down the left flank too.

A really tidy display from the midfielder as he swept things up in front of his defence and kept Arsenal ticking over with some good passes forward too.

Similarly to his midfield partner, Coquelin wasn’t shy in getting stuck in and put himself about to break up Sunderland attacks and offer his defence protection.

Great cross for the opening goal as he continues to have a decisive impact. However, had chances of his own to get on the scoresheet and should have done better.

Also missed a great chance to score, but caused problems in between the lines as he was a real creative spark for Arsenal.

His movement and clever play added to Sunderland’s defensive troubles, but as mentioned by Wenger recently, he needs to be more composed with his finishing as he blazed a couple of chances over in the first half.

Brilliant movement and header to break the deadlock, and kept his composure to add a second. Constant menace for Sunderland with his movement, classy touches on the ball and of course his finishing.

First two touches resulted in two goals. His introduction was absolutely crucial in swinging the game back in Arsenal’s favour after they had thrown away their lead.

Arsenal supporters will be delighted to see him back from injury and he looked dangerous in his short run out.

Not much time on the pitch to make an impression.