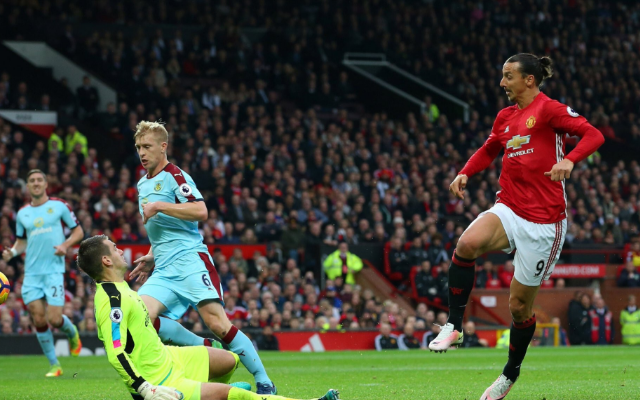 Manchester United have been held to a 0-0 draw at Old Trafford by Burnley.

United created plenty of chances and had an incredible 37 attempts at goal, but failed to find that cutting edge and it’ll be two points dropped from Jose Mourinho’s point of view.

Zlatan Ibrahimovic’s performance may be tough to stomach for United fans, his inefficiency upfront was ultimately was cost them.

De Gea had absolutely nothing to do today, he should have brought a deck chair with him.

Since Jose Mourinho took over as Manchester United manager, Antonio Valencia has been the first-choice right-back predominantly. Matteo Darmian had his chance today and was brilliant. Defensively he didn’t have much to do, but going forward he was a constant threat linking with the United attack.

Marcos Rojo has had many unconvincing performances for Manchester United, but today he looked assured and dependable. Eric Bailly’s knee injury gave Rojo a chance to impress at the back, and he did.

Daley Blind, like Rojo, was not considerably tested today. When he was, though, he stood firm and he provided quality distribution from the back.

Shaw has been in-and-out of the Manchester United lineup under Jose Mourinho. Today he was chosen, and he took full advantage of the opportunity. There was a moment after Herrera had seen red where Andre Gray looked as though he was through on goal, but Shaw’s recovery denied the Burnley striker and ultimately saved his side.

Ander Herrera provided control for United in the midfield and was classy as ever in possession. That was until he saw red for a second yellow card. He was walking a tight-rope after being booked earlier in the match but that didn’t prevent him from flying into another challenge – and he paid the price.

It was another game without a direct goal contribution for the world-record signing, but Paul Pogba’s undeniable quality was on display for all to see. In a game where Manchester United lacked cutting edge, Pogba was constantly looking for that final ball. Had his team-mates been more efficient today, Pogba could be walking away with a couple of assists. It was the best I’ve seen the Frenchman play since his return to Old Trafford.

Lingard was the least effective attacker for United today. He wasn’t able to have any direct influence on the game, and his final ball was devoid of any real quality.

There were suggestions when Jose Mourinho arrived at Manchester United in the summer whether Juan Mata had a future at the club – they have fast been forgetten. Mata was handed the armband today by Mourinho and it was a captains performance.

At 18-years-old, Marcus Rashford’s best performances are still to come. Today, however, was very much one to forget for the England international. He showed glimpses of his explosive speed, but was never able to get into full-flow nor did he threaten Burnley goal-keeper Tom Heaton.

Wow. I’ve never seen a performance quite like that from Zlatan Ibrahimovic. A striker who has a reputation for not just scoring goals, but scoring an obscene amount of incredible goals. Unfortunately, there is no two ways about it, today he was awful. He had chance after chance to give United the lead and squandered them all. That’s six league games without a goal now, and one in his last ten.