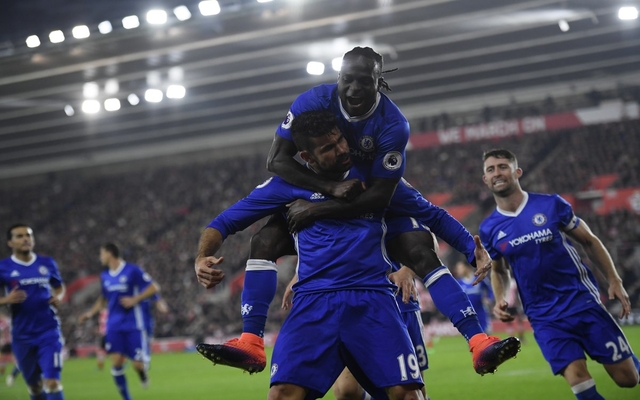 Goals from Eden Hazard and Diego Costa secured all three points for the visitors, with Antonio Conte undoubtedly left delighted with what he saw from his players overall.

The win moves Chelsea to within a point of the joint Premier League leaders as they have certainly turned a corner and look in ominous form.

Not particularly troubled by Southampton in a solid performance as he dealt with danger when called upon to keep another clean sheet.

Another disciplined display from the Spaniard who was as reliable and defensively sound as ever and he is forming a solid partnership with his teammates at the back.

Aside from a ridiculous tumble in the second half, he deserves credit now for working hard and looking solid at the back.

Positive performance from the England international following a poor night in midweek, as he played his part in preventing the Saints from getting a foot in the game.

Continues to impress in his new role, with his defensive work equally as impressive as his play going forward.

Great left foot results in great delivery from the left flank while his work on his side of the pitch gives Hazard more freedom ahead of him.

Provided great coverage for the backline as he tidied up in midfield with another strong performance.

An energetic and tenacious performance as ever from the Frenchman who is key in Chelsea’s midfield.

Pressed well off the ball and was lively on it as he continues to impress under Conte and forms an important part of his system.

Should have done better in a one-on-one with Fraser Forster but more than made up for it with a wonderful strike to double Chelsea’s lead.

Another excellent performance from the Belgian international who continues to shine in this system for Conte as he has now surpassed his goal tally from last season already.

Game was wrapped up by the time he was introduced but did well to help his side close out the win.

Added solidity at the back to help secure the three points.