Sky Sports pundit Charlie Nicholas has picked his Premier League team of the season so far, and there are certainly a few surprise selections and snubs.

In his defence, he’s looked at the entire league and not just gone for players at the big clubs, but nevertheless, there are still some notable absentees.

The 54-year-old has snubbed both Manchester United and more surprisingly Manchester City entirely with his choices. While you can agree with United given their underwhelming start to the campaign, it’s arguably a bit of a surprise that he hasn’t found room for a single one of Pep Guardiola’s men.

Injuries and rotation have counted against them, but then only Hector Bellerin and Mesut Ozil make it from the Arsenal squad.

Laurent Koscielny, Theo Walcott and Alexis Sanchez could all make a case to be included, but the former Gunners star has opted not to include them and gone with other options including the current Premier League top goalscorer in Chelsea’s Diego Costa.

Liverpool magician Philippe Coutinho gets the nod after making a strong start to the campaign, while in-form stars such as Michael Keane and Joe Allen are also included.

Some eyebrows will probably be raised over the inclusion of Nordin Amrabat of Watford, but Nicholas explains in his Sky Sports post that ultimately he believes he gives his side balance and energy which is enough to see him edge out Santi Cazorla.

Agree or disagree, at least it isn’t a run-through of the top four clubs. However, there are certainly several individuals who have a valid case to have been included. 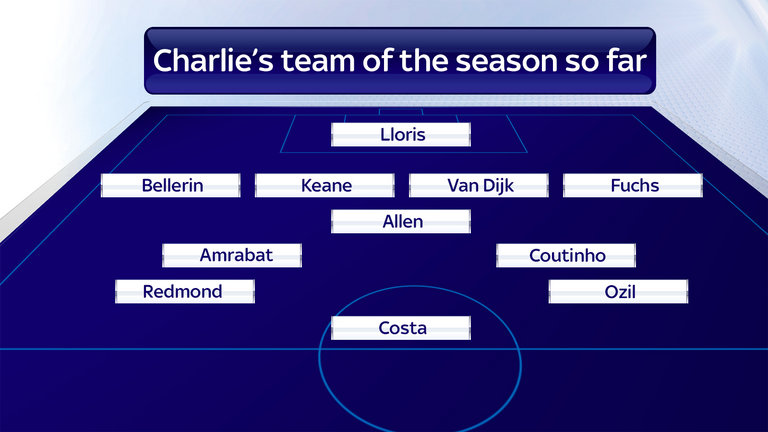