It appears as though Liverpool playmaker Philippe Coutinho will be Barcelona’s number one priority in the transfer market moving forward.

The Brazilian international has been in stunning form so far this season, scoring six goals and providing six assists in just 12 games in all competitions for Liverpool to also help them to the top of the Premier League table.

He took that good run of performances with him on international duty too as he played a crucial role in Brazil’s 3-0 win over Argentina on Thursday night.

However, Sport have splashed out a major story on their front cover on Friday morning, with Barcelona’s ‘Objective Coutinho’ dominating their headlines. 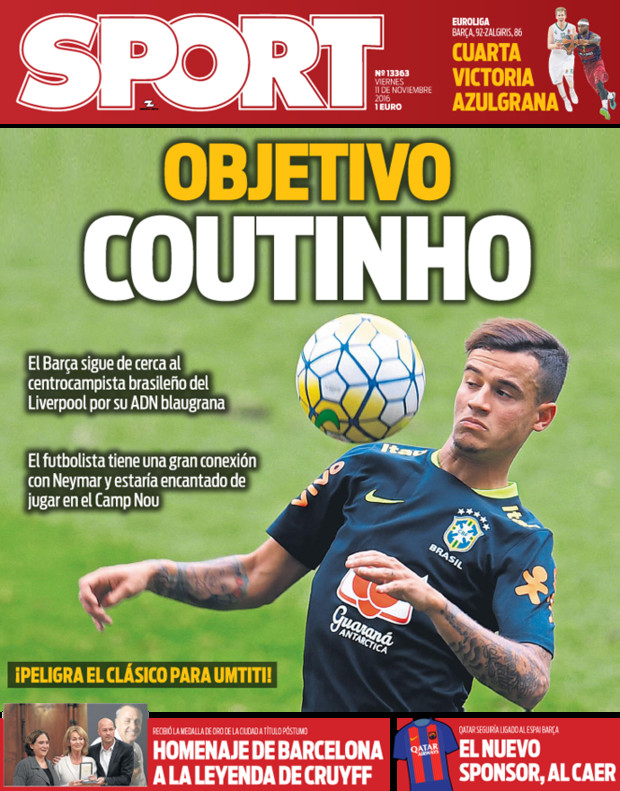 It’s claimed that Barca are thinking ahead and have identified the 24-year-old as a key part of strengthening Luis Enrique’s squad.

Further, it’s added that he remains close friends with compatriot Neymar which could smooth the deal over, and his ‘Barca DNA’ would see flourish at the Nou Camp as he would join many of the best players in the world and seamlessly fit in.

Naturally though, Liverpool boss Jurgen Klopp will be desperate to keep the former Inter star at Anfield, such is his importance to the Reds’ progress in the months and years ahead.

Liverpool have sold key players at regular intervals over the past few years, and losing Coutinho would undoubtedly be a major blow to their ambitions of competing for titles both at home and in Europe.

Nevertheless, it remains to be seen whether or not the appeal of playing for Barca is too difficult for the Brazilian to ignore. Although he’s given no indication that he would want to leave Merseyside, it’s a tough one to turn down the La Liga champions and the opportunity to play alongside the likes of Neymar, Lionel Messi and Luis Suarez.