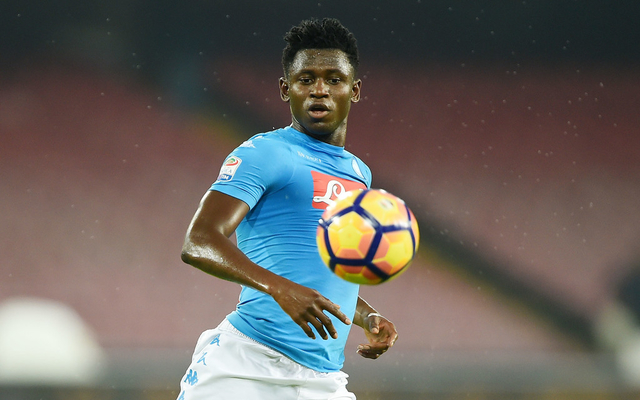 Chelsea are reportedly set to make an offer of up to €50m to sign Napoli midfielder Amadou Diawara, according to reports in Italy.

Antonio Conte signed N’Golo Kante from Leicester City this past summer, but with Cesc Fabregas struggling for playing time and John Obi Mikel seemingly leaving Stamford Bridge when his contract expires at the end of the season, the Chelsea midfield will need strengthening.

According to Calciomercato, who report on a story in Monday’s print edition of Tuttosport, the Italian tactician is planning a raid on Serie A giants Napoli for Diawara.

The 19-year-old joined the Partenopei from Bologna in a deal worth €15m in the summer, but according to the report, they could be tempted to cash in on three times the amount they spent by selling for a fee in the region of €40m-€50m.

It’s added that no deal will be done in January, but a summer switch to the Premier League could be a possibility for the combative midfielder.

It would be a significant investment from Chelsea if true, and a somewhat risky one given the money involved as Diawara hasn’t even established himself at Napoli so far this season.

After shining for Bologna, the defensive-minded ace has made just six appearances for Maurizio Sarri so far this season, and has some way to go to justify his €15m tag let alone what Chelsea are reportedly offering.

Nevertheless, with the midfield evidently a priority in the next two transfer windows, Conte will want to get it right and build on the success that he has enjoyed in west London to this point with young, talented and ambitious individuals taking the club forward.