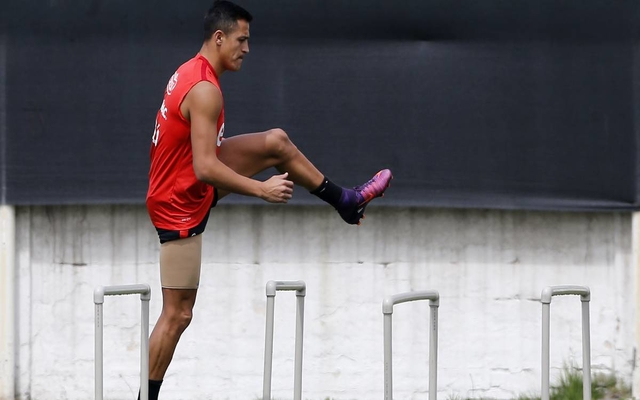 Arsenal forward Alexis Sanchez returned to training with Chile on Sunday, joining his teammates in the full session to provide coach Juan Antonio Pizzi with a boost.

While that may have been considered positive news for Arsenal too given the 27-year-old’s injury concerns this past week, the image above shows that he still has significant strapping on his hamstring.

In turn, that will not please the Gunners or Arsene Wenger, who will now face an anxious wait to get the Chilean international back to north London in order to assess the injury with the Arsenal medical staff and determine just how serious the muscle problem is.

As noted by AS Chile, Sanchez completed the training session with no problems, but Pizzi and his staff are said to be closely monitoring him as a tear in his muscle last week had seemingly ruled him out of the upcoming clash with Uruguay.

The former Udinese and Barcelona star has been in excellent form for Arsenal so far this season, scoring eight goals and providing seven assists in 15 appearances in all competitions.

In turn, Wenger will be desperate to avoid losing him to injury, and will be left infuriated if Chile opt to play Sanchez and he aggravates the issue.

It appears as though it’s a risk that they will take given that he’s been pushed in training, and that could lead to serious issues between the national team and club concerned if there was to be a further setback.

For now though, Arsenal supporters will be desperately hoping that there is no further news of Sanchez’s injury as they hope he’ll be available for selection against Manchester United on Saturday.