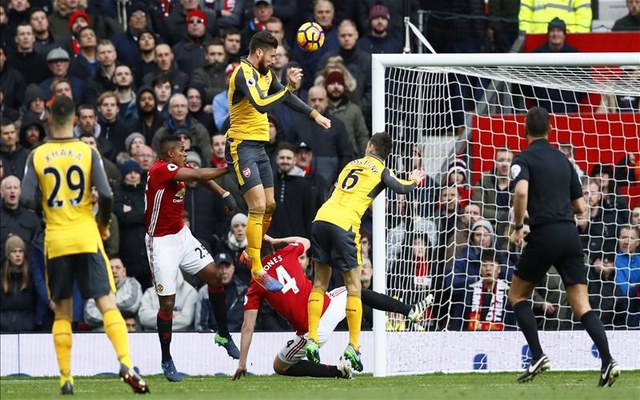 Arsenal were far from their best but were able to snatch a 1-1 draw at Manchester United at Old Trafford on Saturday afternoon.

The visitors were unable to get into their stride and failed to put their rivals under much pressure, and it looked as though they would leave empty-handed after Juan Mata’s goal.

However, Olivier Giroud struck late with a bullet header to rescue a point as Arsene Wenger will be relieved to come away with a point.

The veteran stopper made some great saves to deny United and kept Arsenal in it. Not much he could have done to deny Mata.

Always going to be difficult for him to step in for Hector Bellerin coupled with a lack of playing time, but did a decent job.

Struggled at times with the pace of the United forward line but did well to limit their threat for the most part.

A strong performance from the Arsenal stalwart as he marshalled the backline and produced a defensively sound display.

Struggled with United’s pace and pressing down the right and came under pressure at times as it wasn’t one of his better performances.

Needs to leave his shooting boots at home, but made some crucial interceptions and battled hard for his team to get a foothold in midfield.

Similarly to Coquelin, did well in offering a bit of grit and solidity in midfield, but it was a limited display and was replaced in the second half.

Not particularly positive from the Welshman, as he struggled out on the right to have any sort of influence on the game.

His critics always jump on the fact that he goes missing in the big games. Did little to silence them as he was often out of the game and not pulling the strings like he needs to be.

Similarly to Ozil and others, anonymous for large periods and wasn’t able to have a positive impact on the game in a poor performance.

Came into the game with an injury concern but worked hard off the ball and was always lively and looking to get possession. Will have more decisive days.

The Frenchman surely has to start now after another big impact off the bench. Bullet header that left David De Gea with no chance.

Late introduction but did something that his teammates couldn’t and provided the perfect cross which Giroud dispatched of to finally break the United defence.

Not particularly influential on the game after having 10 minutes or so on the pitch.