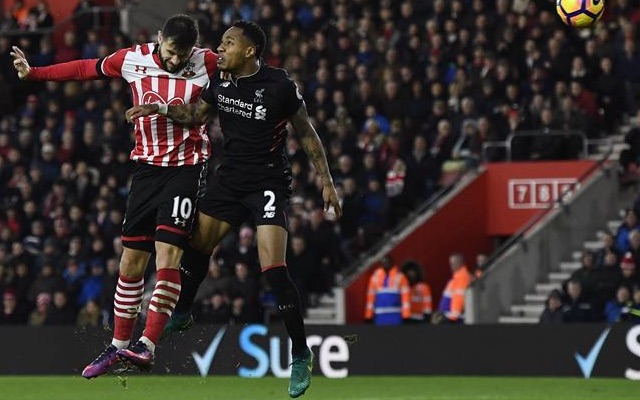 Liverpool were nilled for just the second time in 15 games this season as they were held to goalless draw at Southampton on Saturday.

The Reds dominated possession at St Mary’s Stadium, bossing it with a 65% share.

Jurgen Klopp’s side also had the majority of the shots – 15 to Southampton’s three.

However, neither team were able to work the goalkeeper often enough, as just two of those 18 combined efforts were on target as Roberto Firmono and Sadio Mane worked Saints goalkeeper Fraser Forster.

Mane was one of three Liverpool players who were up against their former club. He, Dejan Lovren and Nathaniel Clyne did solidly, according to Empire of the Kop, who gave them 7/10 each.

Firmino was the only man to earn an 8/10, while five scores of 6/10 were dished out by the Liverpool fan blog, which won Best Social Football Account at the Football Blogging Awards on Thursday night.

GK: Loris Karius 6/10 – Literally nothing to do all afternoon for the young German.

RB: Nathaniel Clyne 7/10 – Industrious down the right. Missed a stonewall chance late on with his head.

CB: Joel Matip 8/10 – Classy and composed at the back throughout. A superb centre-back. Always made the right decision, too.

DM: Jordan Henderson 7/10 – Passed and tackled well at the base of midfield.

CM: Emre Can 6/10 – Like Wijnaldum, wasn’t creatively effective, although helped us dominate possession throughout.

RW: Sadio Mane 7/10 – Forced a great save in the first-half but found it difficult to get in behind despite playing on the shoulder.

LW: Philippe Coutinho 6/10 – Saw loads of the ball but looked visibly jaded. Fluffed a one-on-one chance and got outmuscled on a few occasions.

ST: Roberto Firmino 7/10 – Pressed fantastically and showed his class from deep, but missed an absolute sitter in the second-half when played through by Coutinho. That was our moment

SUB: Daniel Sturridge – 7/10 – Looked sharp and made Clyne’s chance. In truth, should have come on much earlier.