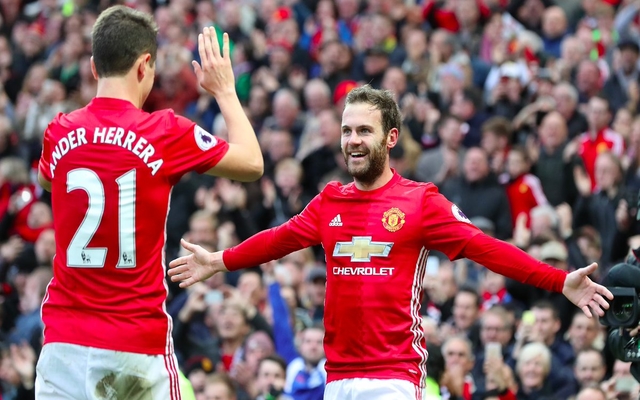 Manchester United thought they had done enough to seal all three points against Arsenal on Saturday but were held to a 1-1 draw by their rivals.

Juan Mata gave the home side the lead, but Olivier Giroud struck late on to ensure that the two sides had to settle for a point apiece.

In turn, Jose Mourinho would have been disappointed as his side missed the chance to close the gap on the top four.

Had little to do throughout the game and was unable to do much about Giroud’s header finding the back of the net.

Wasn’t asked to do much defensively and so had the freedom to break forward and cause Arsenal problems. A welcome return to action after injury.

Slipped in the build-up to Giroud’s goal which ruined what was otherwise a decent performance as he looks to put together a run of games.

The Argentine wasn’t afraid to get stuck into a tackle and produced a solid display to give Mourinho a reason to keep him in the team.

Risked being sent off in the first half and was replaced early as he didn’t do much to silence speculation over a possible exit in January.

Despite his advancing years, he continues to play a pivotal role for United in front of the defence as he keeps things ticking for his side.

Tenacious display from the Spaniard as he wasn’t afraid to put his foot in while also getting on the ball and pushing the tempo of the game.

Took his goal very well with a clinical finish and continues to play a decisive role for United as a creative spark for his side behind the striker.

Some flashes of how commanding and classy he can be but wasn’t consistent enough to dominate the game for his side in midfield.

Had a couple of moments that looked threatening but wasn’t clinical and was eventually replaced as he was too quiet in general.

Still not reaching the heady heights of last season even in his preferred role up front but worked hard for his teammates off the ball.

Despite his troubles last week, was given 30 minutes but wasn’t able to offer a decisive contribution.

The Dutchman was brought on to help control the game and see out the win but things didn’t stick to the plan.

Similar to Blind in that he was brought on to protect United’s lead but United conceded late on to drop points.