Arsenal travel to face Manchester United on Saturday in the pick of the fixtures this weekend as Matt Le Tissier has taken a closer look at the two sides.

The visitors arrive full of confidence as they look to stretch their unbeaten run to 17 games in all competitions, but Arsene Wenger comes up against old foe Jose Mourinho against whom he has struggled in the Premier League.

While the two managers will renew hostilities, it will be down to the players on the pitch to make the difference, and Le Tissier has gone for six Arsenal players and five United players in his combined XI.

Unfortunately from an Arsenal perspective, Hector Bellerin will miss out on Saturday due to an ankle injury, while Santi Cazorla will join him on the sidelines due to an injury issue of his own.

Alexis Sanchez had his troubles with fitness on international duty with Chile this past week but is expected to feature, and so it remains to be seen whether or not Arsenal can maintain their positive run without key individuals.

Nevertheless, they’ve still made it into the combined XI, along with Eric Bailly who also misses out through injury while Zlatan Ibrahimovic is suspended for Saturday’s showdown.

Cases could be made for the likes of Petr Cech, Antonio Valencia and Wayne Rooney, but ultimately there can be few complaints as Le Tissier seems to have got it spot on and it’s certainly a shame that the entire line-up won’t be on show this time round.

Regardless though, it should still be a fascinating battle between these two Premier League giants as they look to march on and deliver a blow to their rival’s hopes. 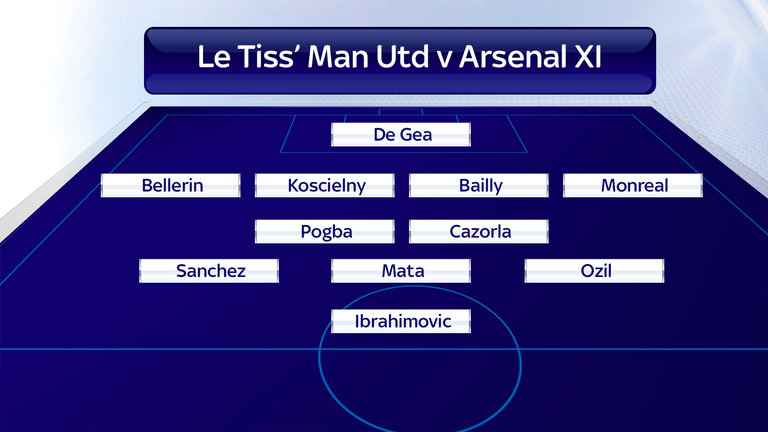