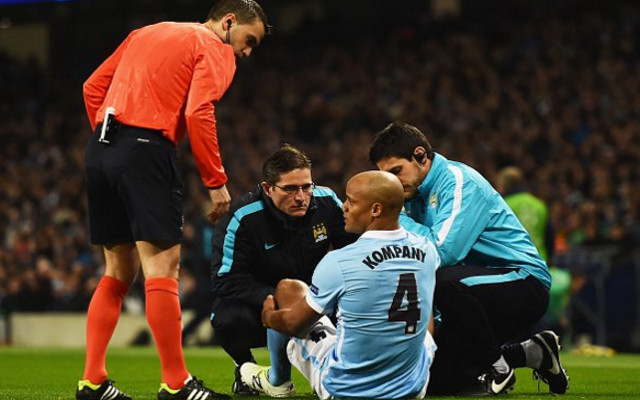 Manchester City boss Pep Guardiola has revealed that Vincent Kompany will be out injured for a number of weeks with a knee injury, report the Mirror.

Kompany was taken off during the first-half of City’s victory over Crystal Palace at the weekend with what appeared to be a head injury. The Belgian felt the full force of goalkeeper Claudio Bravo, after he collided with his team-mate as they both challenged for the ball.

Though there appears to be no lasting damage to the Belgian’s head, Guardiola has been quoted by the Mirror revealing that his captain did not come out unscathed: “Fortunately nothing has happened to his head but in that action there was a little bit of a problem with the knee.”

The 30-year-old has spent the majority of this calendar year on the treatment table, and according to his manager, there has been no upturn in his fortunes: “He is injured for the next weeks”

City face Borussia Monchengladbach on Wednesday as they look to reach the knockout stages of the Champions League. If they are to progress to the next round, they’re going to have to do it without Kompany.