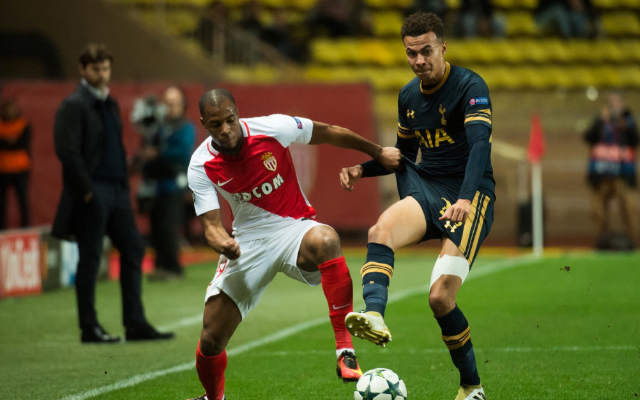 Tottenham are out of the Champions League at the group stage with a game to spare after being beaten by AS Monaco this evening.

The home side drew first blood through a Djibril Sidibe header from close range. Harry Kane then levelled the scores from the penalty spot, but Thomas Lemar put Monaco ahead again just seconds later. It proved to be a frustrating night for Mauricio Pochettino’s men.

Tottenham player ratings vs AS Monaco:

But for the heroics of Hugo Lloris, it could have been a lot worse. Helpless for the first goal and motionless for the second, Lloris sprung into action to deny Monaco a third. One of the best shot-stopping goalkeepers on the planet.

Mauricio Pochettino opted to play Kieran Trippier over Kyle Walker tonight, and there has to be questions asked about why. Squad rotation is key in keeping harmony within the squad and ensuring key players remain fresh, but he should be picking his best team for a game this key. Trippier looked relatively unconvincing and didn’t offer anything going forward.

Eric Dier had the look of a man who hasn’t been playing centre-back for the past 12 months. Funny, that. Though he showed his usual quality distribution from the back, it wasn’t his best performance all things considered.

Kevin Wimmer has yet to fully settle into life in Tottenham, and we are yet to see the best of him at White Hart Lane. Tonight he didn’t do anything majorly wrong, he is a decent enough deputy for Jan Vertonghen and Toby Alderweireld.

Danny Rose was one of Tottenham’s best players tonight. He has evolved into a well-rounded full-back, adding astute defending to his already dangerous attacking skill-set.

Victor Wanyama formed a fairly sturdy partnership with Mousa Dembele this evening. He passed the ball around well and provided a strong spine for the Tottenham team.

Few carry the ball as well as Mousa Dembele, when he gets into full swing he is hard to shrug off. Tonight, he didn’t offer much going forward. He often chose the easy pass opposed to something more expansive.

It was a frustrating night for Alli, which echoed how his season has gone so far. He missed a good chance late on at the back post which ultimately proved costly for his side. He has had, and will have, better nights than tonight.

Harry Winks exploded onto the scene with a goal against West Ham at the weekend. Mauricio Pochetinno kept faith in the youngster, but he was unable to have any genuine effect on the game.

Heung-Min Son has arguably been Tottenham’s player of the season so far, but he was poor tonight. Usually he is a danger to the opposition goal from the wide areas, but his threat was almost completely nullified by Monaco’s defence.

Harry Kane scored his penalty, just. Other than that, there were few notable contributions from Spurs’ talisman. He still hasn’t reached his optimum level of fitness after recovering from an ankle injury, and he looked laboured this evening.