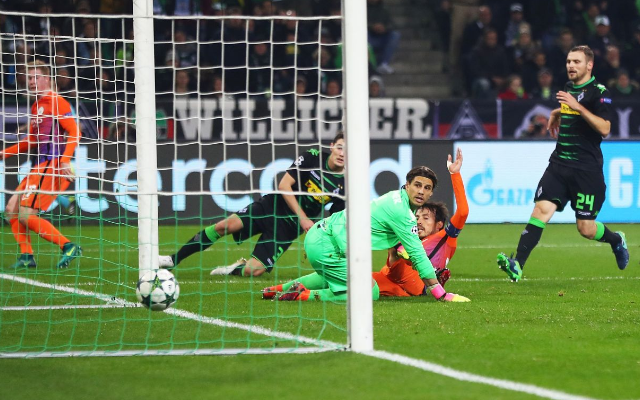 Manchester City were held to a 1-1 draw against Borussia Monchengladbach in their Champions League clash this evening.

City were looking to keep pace with Barcelona at the top of group C, but the La Liga giants will finish enter the next round as group winners after beating Celtic 2-0

Pep Guardiola’s side went a goal down after being hit on the counter-attack, with Raffael providing the finishing touch. David Silva scored the equaliser, poking home from close range after a smart cutback from Kevin De Bruyne. City were, however, unable to find a winner.

Bravo made some smart stops and had no chance for Raffael’s opener. During a spell of Gladbach pressure early in the first-half, he was called into action and stood firm.

Otamendi was caught out for Raffael’s opener, but asides from that he didn’t contribute anything of note to the game.

You never quite know what to expect from John Stones. At the tender age of 22-years-old, he is still by no means the finished article. Tonight, he didn’t look particularly assured at the back. He was fortune that his errors went unpunished.

Tonight, Kolarov very much looked like a left-back playing at centre-back. He has all the necessary tools to succeed in that position, but it isn’t natural. It was an experiment from Pep Guardiola, but not one that paid off.

Fernandinho has emerged as one of the most accomplished central-midfielders in the Premier League this campaign. Tonight he provided assurance in a team that didn’t exactly inspire confidence. Classy in possession and effective in breaking up play.

Gundogan had a night to forget tonight. He moved the ball around well enough but didn’t have his typical influence on the game, nor was he able to get into any positions to threaten the Gladbach goal.

Right from the beginning it looked a mistake for Pep Guardiola to choose Jesus Navas this evening. After a poor 30 minutes on the right wing, he was moved back to right-back. Leroy Sane would probably have been a better pick.

De Bruyne provided an excellent assist for David Silva’s goal. He made a defence-splitting run before firing the ball across goal towards his team-mate, who made no mistake. Though as a whole it wasn’t his best performance, it’s moments of quality like that which seperate De Bruyne the rest.

David Silva’s goal (click here to see it) earned his side a vital point in the end. He probably hasn’t scored many easier goals, prodding home from close-range after Kevin De Bruyne’s cut-back. He did, though, show great determination to get onto the end of the pass and it was his contribution that made the difference.

Sterling did not have any sort of impact on the game. Though young and still finding his feet at the Etihad, he needs to be putting in a better performance in this sort of game if City want to be successful.

Aguero, like against Crystal Palace at the weekend, was nowhere to be seen tonight. He missed a great chance in the first half, but other than that you would have been forgiven for thinking he wasn’t on the field of play.