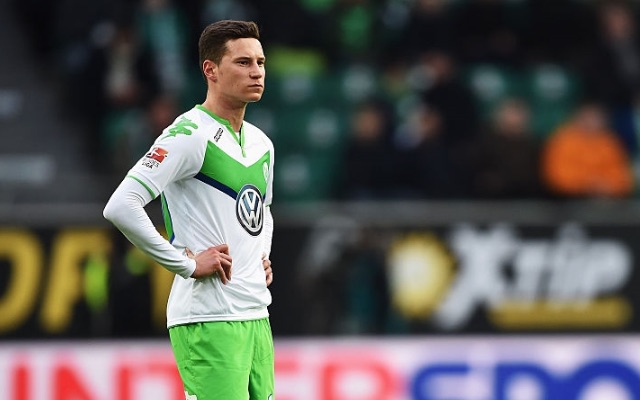 Arsenal are reportedly monitoring long-time target Wolfsburg star Julian Draxler closely after it was claimed that he could be ready to leave the Bundesliga outfit.

The 23-year-old scored nine goals in 34 appearances last season, but has yet to register a goal or an assist in 10 outings so far this year.

As noted by The Sun, Draxler was signed from Schalke in a £25m deal in 2015, but after impressing at Euro 2016 and seemingly outgrowing his role at Wolfsburg, speculation has again linked him with an exit next year.

Juventus are also reportedly interested in the German international, and so if Arsene Wenger has genuine ambitions of taking the midfielder to the Emirates, he will have to fight off stiff competition.

Draxler has been linked with an exit previously after insisting this past summer that he was keen to move on, as noted in the report, but Wolfsburg remain resolute in that he won’t be going anywhere in January but did leave the door open to a possible move in the summer.

“We may evaluate the situation differently, and may do things differently next time,” director of sport Klaus Allofs told Sport1, as noted by Sky Sports.

“Does this mean letting him leave? Potentially.”

It has been a difficult campaign for the German ace thus far, as aside from being unable to get into his stride and play a decisive role for his team, he’s been forced to sit out the last two games with injury.

With Wolfsburg sitting in 14th place in the Bundesliga table and just four points above the relegation zone, the signs aren’t looking good for them in terms of their ambitions for the season and keeping hold of their top players.