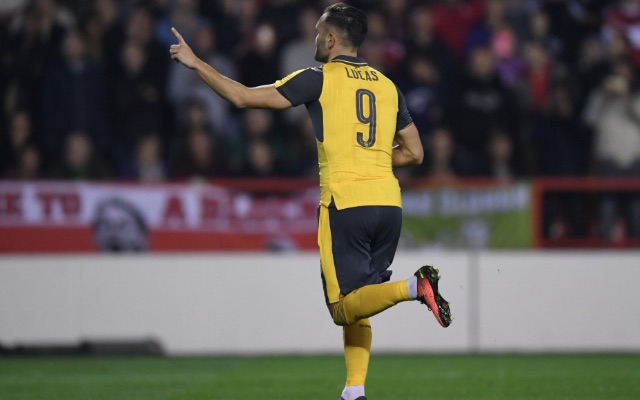 Arsenal forward Lucas Perez is likely to be in contention to return to action in his side’s EFL Cup game with Southampton next Wednesday night.

As seen in the image below shared by the Gunners on social media, the Spaniard is back in training and working towards completing his recovery.

Having been ruled out of action with an ankle injury since the win over Reading in the same competition last month, Perez has returned ahead of schedule and will now hope to get back on track and push for a spot in the starting line-up.

Wenger confirmed that the 28-year-old won’t be involved this weekend against Bournemouth in the Premier League, but next Wednesday’s quarter-final encounter with the Saints does now look a real possibility.

“Lucas was in training for the first time again today, he might be in contention for Wednesday, but one training session is not enough to play on Sunday.”

Perez contributed three goals and four assists in just seven appearances in limited minutes prior to his injury, and so evidently he can be a decisive player for Arsenal this season if fit and in form.

He’ll hope that he can pick up from where he left off, and with a packed schedule for Christmas, Wenger will be delighted to have another option at his disposal so he can rotate and keep his players fresh.

In other news in his press conference, Wenger confirmed that Santi Cazorla and Hector Bellerin remain sidelined with injuries, and so it remains to be seen when the influential Spanish pair can join their compatriot back with the first team.

? "Lucas is for the 1st time in training today – he might be in contention for Wednesday but one session is not enough for Sunday"#AFCvBOU pic.twitter.com/JfwOAxgJHG