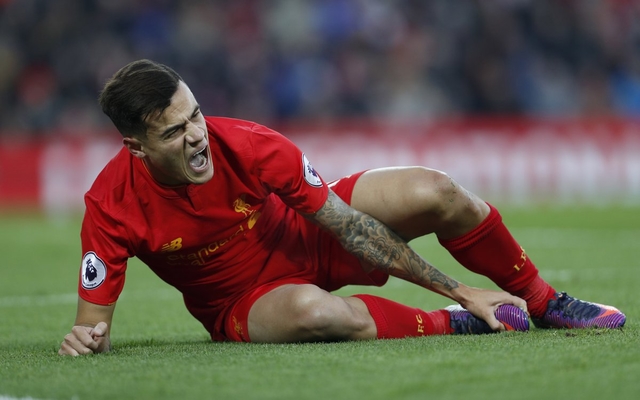 Liverpool playmaker Philippe Coutinho will undergo a scan on Monday to determine the extent of the damage suffered after picking up an ankle injury.

The Brazilian international was stretchered off during his side’s win over Sunderland on Saturday, after a nasty-looking collision with Didier Ndong.

Given that the 24-year-old has scored six goals and provided six assists in 14 appearances in all competitions already this year, any spell on the sidelines will be a hurtful blow for the Reds.

According to BBC Sport, Coutinho left Melwood on crutches on Sunday with his right foot in a protective boot, thus suggesting that the early signs are not positive.

As per The Times’ Paul Joyce on Twitter, Liverpool believe that it’s ankle ligament damage, but ultimately only the scan will allow them to know how long their star man will be out of action for.

The report from BBC goes on to give fitness updates on other key Liverpool players too, with Roberto Firmino said to have escaped any issue after taking a knock on his calf.

Daniel Sturridge missed the game with a calf issue of his own and sat out of training on Sunday which suggests that he could be set to miss further games while Adam Lallana is making slow progress after returning to training following a groin injury.

Nevertheless, the biggest fear that Liverpool will have is over Coutinho as aside from the statistics noted above, he has proven himself to be an integral part of his side’s positive attacking play and will be a major miss for any amount of time he is forced to sit out.