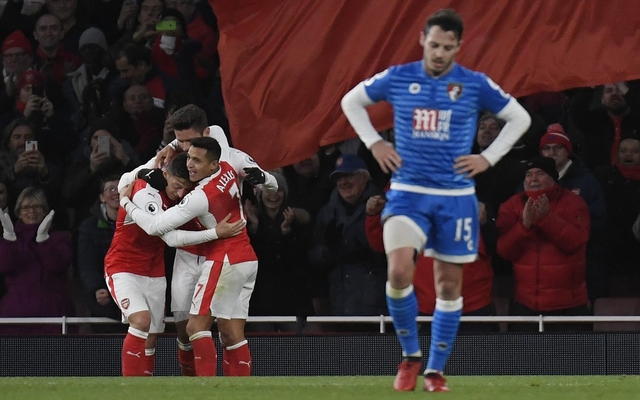 Arsenal secured a 3-1 win over Bournemouth on Sunday with Alexis Sanchez scoring twice to take his tally to eight Premier League goals for the season so far.

The Chilean international gave the Gunners the lead early on after he pounced on a mistake from Steve Cook to break the deadlock.

However, Callum Wilson struck from the penalty spot to ensure that the two sides were level at the interval as the pressure was building on Arsenal to end a three-game winless streak.

The end result was harsh on Eddie Howe’s side, but goals from Theo Walcott and a second from Sanchez ensured that they return home empty-handed as Arsenal close the gap on their title rivals at the top of the table and extended their unbeaten run to 19 games in all competitions.

The Gunners saved the best till last though as Mesut Ozil and substitute Olivier Giroud combined wonderfully to open up the Bournemouth defence as Sanchez snuck in from the back post to tap home the killer blow and seal the win for his side.

Giroud will undoubtedly have felt a little disappointed to be back on the bench for this one, but the Frenchman continues to be decisive and is certainly a hugely important part of this squad as Arsenal look to end their title drought this season as they now sit three points adrift of leaders Chelsea.