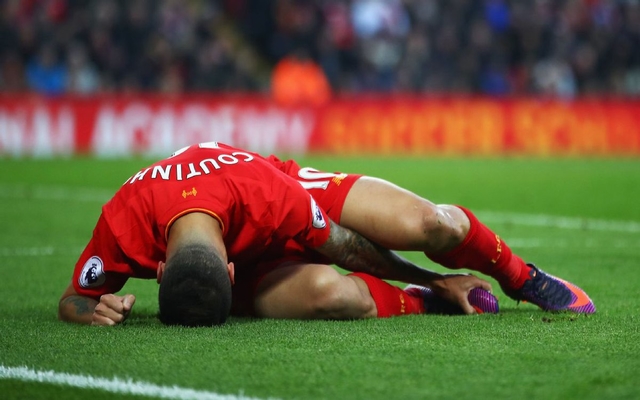 Liverpool are reportedly fearful that playmaker Philippe Coutinho will be sidelined until the New Year with the ankle injury he sustained at the weekend.

The Brazilian international suffered the knock after a strong challenge from Sunderland man Didier Ndong, and was stretchered off at Anfield visibly in real pain.

As reported by The Mirror, Coutinho was seen at Melwood on crutches on Sunday with his foot in a protective boot, which undoubtedly was a scary sight for Liverpool fans hoping that their influential star won’t be sidelined for a lengthy period of time.

The report adds that the 24-year-old will undergo further scans on Monday to determine the full extent of the issue, but the early suggestions are that they won’t be seeing Coutinho back in action until the New Year.

That will be a major blow for Jurgen Klopp to be without him over a packed schedule over Christmas, and with the likes of Adam Lallana and Daniel Sturridge also missing at the weekend due to injury, it will certainly test his strength in depth.

Amongst those games include the Merseyside derby against Everton and a New Year’s Eve clash with Manchester City an Anfield with Coutinho likely to miss both.

In turn, it will now be a case of hoping that the ankle ligament damage isn’t so severe that the former Inter star will be ruled out beyond January, as that would present a serious problem for Liverpool and their Premier League title ambitions.